The Complete Guide to Memory: The Science of Strengthening Your Mind (Hardcover) 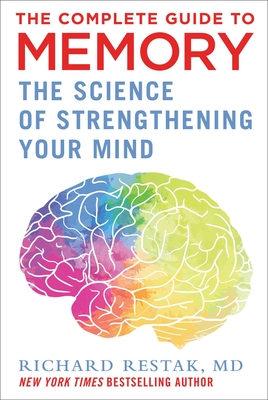 The Complete Guide to Memory: The Science of Strengthening Your Mind (Hardcover)


On Our Shelves Now at:
A comprehensive guide to understanding how memory works, how memory forms, the mind-body connection, and more!
In the busy, information-filled world in which we live, it’s often easy to forget things and hard to keep track of how details get stored in our brain. The Complete Guide to Memory serves to provide a one-stop resource that covers the essentials on memory.  World-renowned memory expert, Dr. Richard Restak, addresses the following topics in detail: With tips and tricks to manage memory well for people of all ages and personal examples of the techniques used, this book leaves no stone unturned.

Dr. Richard Restak has written over twenty books on the human brain, two of which were main selections of the Book Of The Month Club. He has penned dozens of articles for national newspapers including the Washington Post, New York Times, Los Angeles Times, and USA Today; he has contributed brain and neuroscience-related entries for the World Book Encyclopedia, the Campton's Encyclopedia, the Encyclopedia Britannica, and the Encyclopedia of Neuroscience. As a regular lecturer, both nationally and internationality, he has presented commentaries for both Morning Edition and All Things Considered on National Public Radio and made numerous appearances on leading television talk shows including: the Today Show, Good Morning America, the Discovery Channel, and the McNeil-Lehrer Report.
From the New York Times (Hope Reese):
"As we age, our memory declines. This is an ingrained assumption for many of us; however, according to neuroscientist Dr. Richard Restak, a neurologist and clinical professor at George Washington Hospital University School of Medicine and Health, decline is not inevitable.

"The author of more than 20 books on the mind, Dr. Restak has decades’ worth of experience in guiding patients with memory problems. “The Complete Guide to Memory: The Science of Strengthening Your Mind,” Dr. Restak’s latest book, includes tools such as mental exercises, sleep habits and diet that can help boost memory.

"Yet Dr. Restak ventures beyond this familiar territory, considering every facet of memory — how memory is connected to creative thinking, technology’s impact on memory, how memory shapes identity. “The point of the book is to overcome the everyday problems of memory,” Dr. Restak said.

"Especially working memory, which falls between immediate recall and long-term memory, and is tied to intelligence, concentration and achievement. According to Dr. Restak, this is the most critical type of memory, and exercises to strengthen it should be practiced daily. But bolstering all memory skills, he added, is key to warding off later memory issues.

"Memory decline is not inevitable with aging, Dr. Restak argues in the book. Instead, he points to 10 “sins,” or “stumbling blocks that can lead to lost or distorted memories.” Seven were first described by the psychologist and memory specialist Daniel Lawrence Schacter — “sins of omission,” such as absent-mindedness, and “sins of commission,” such as distorted memories. To those Dr. Restak added three of his own: technological distortion, technological distraction and depression.

"Ultimately, “we are what we can remember,” he said. Here are some of Dr. Restak’s tips for developing and maintaining a healthy memory.

"Some memory lapses are actually attention problems, not memory problems. For instance, if you’ve forgotten the name of someone you met at a cocktail party, it could be because you were talking with several people at the time and you didn’t properly pay attention when you heard it.

“Inattention is the biggest cause for memory difficulties, ” Dr. Restak said. “It means you didn’t properly encode the memory.”

"One way to pay attention when you learn new information, like a name, is to visualize the word. Having a picture associated with the word, Restak said, can improve recall. For instance, he recently had to memorize the name of a doctor, Dr. King, (an easy example, he acknowledged). So he pictured a male doctor “in a white coat with a crown on his head and a scepter instead of a stethoscope in his hand.”

"There are many memory exercises that you can integrate into everyday life. Dr. Restak suggested composing a grocery list and memorizing it. When you get to the store, don’t automatically pull out your list (or your phone) — instead, pick up everything according to your memory.

“Try to see the items in your mind,” he said, and only consult the list at the end, if necessary. If you’re not going to the store, try memorizing a recipe. He added that frequent cooking is actually a great way to improve working memory.

"Once in a while, get in the car without turning on your GPS, and try to navigate through the streets from memory. A small 2020 study suggested that people who used GPS more frequently over time showed a steeper cognitive decline in spatial memory three years later.

"Games like bridge and chess are great for memory, but so is a simpler game, said Dr. Restak. For instance, Dr. Restak’s “favorite working memory game” is 20 Questions — in which a group (or a single person) thinks of a person, place or object, and the other person, the questioner, asks 20 questions with a yes-or-no answer. Because to succeed, he said, the questioner must hold all of the previous answers in memory in order to guess the correct answer.

"Another of Restak’s tried-and-true memory exercises simply requires a pen and paper or audio recorder. First, recall all of the U.S. presidents, starting with President Biden and going back to, say, Franklin D. Roosevelt, writing or recording them. Then, do the same, from F.D.R. to Biden. Next, name only the Democratic presidents, and only the Republican ones. Last, name them in alphabetical order.

"If you prefer, try it with players on your favorite sports team or your favorite authors. The point is to engage your working memory, “maintaining information and moving it around in your mind,” Restak wrote.

"One early indicator of memory issues, according to Dr. Restak, is giving up on fiction. “People, when they begin to have memory difficulties, tend to switch to reading nonfiction,” he said.

"Over his decades of treating patients, Dr. Restak has noticed that fiction requires active engagement with the text, starting at the beginning and working through to the end. “You have to remember what the character did on Page 3 by the time you get to Page 11,” he said.

"Among Dr. Restak’s three new sins of memory, two are associated with technology.

"First is what he calls “technological distortion.” Storing everything on your phone means that “you don’t know it,” Dr. Restak said, which can erode our own mental abilities. “Why bother to focus, concentrate and apply effort to visualize something when a cellphone camera can do all the work for you?” he wrote.

"The second way our relationship with technology is detrimental for memory is because it often takes our focus away from the task at hand. “In our day, the greatest impediment of memory is distraction,” Dr. Restak wrote. As many of these tools have been designed with the aim of addicting the person using them, and, as a result, we are often distracted by them. People today can check their email while streaming Netflix, talking with a friend or walking down the street. All of this impedes our ability to focus on the present moment, which is critical for encoding memories.

"Work with a mental health professional if you need to.

"Your mood plays a big role in what you do or do not remember.

"Depression, for instance, can greatly decrease memory. Among “people who are referred to neurologists for memory issues, one of the biggest causes is depression,” Dr. Restak said.

"Your emotional state affects the kind of memories you recall. The hippocampus (or “memory entry center,” according to Dr. Restak) and the amygdala (the part of the brain that manages emotions and emotional behavior) are linked — so “when you’re in a bad mood, or depressed, you tend to remember sad things,” Dr. Restak said. Treating depression — either chemically or via psychotherapy — also often restores memory.

Determine whether there is cause for concern.

"Throughout his career, Dr. Restak has been asked by dozens of patients how they can improve their memory. But not all memory lapses are problematic. For instance, not remembering where you parked your car in a crowded lot is pretty normal. Forgetting how you arrived at the parking lot in the first place, however, indicates potential memory issues.

"There is no simple solution to knowing what should be of concern, Dr. Restak said — much of it is context-dependent. For instance, it’s normal to forget the room number of your hotel, but not the address of your apartment. If you’re concerned, it’s best to consult with a medical expert."