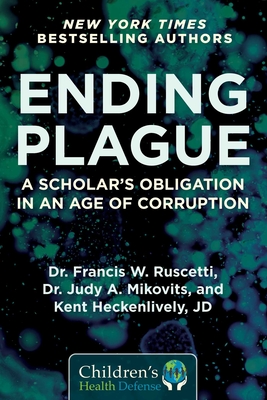 
Not On Our Shelves—Ships in 1-5 Days
"An engrossing exposé of scientific practice in America.”
—KIRKUS REVIEWS

From the authors of the New York Times bestselling Plague of Corruption comes the prescription on how to end the plague infecting our medical community.

Ending Plague continues the New York Times bestselling team of Dr. Judy A. Mikovits and Kent Heckenlively with legendary scientist, Dr. Francis W. Ruscetti joining the conversation. Dr. Ruscetti is credited as one of the founding fathers of human retrovirology. In 1980, Dr. Ruscetti’s team isolated the first pathogenic human retrovirus, HTLV-1. Ruscetti would eventually go on to work for thirty-eight years at the National Cancer Institute.

Dr. Ruscetti was deeply involved in performing some of the most critical HIV-AIDS research in the 1980s, pioneered discoveries in understanding the workings of the human immune system in the 1990s, isolating a new family of mouse leukemia viruses linked to chronic diseases in 2009, and offers his insights into the recent COVID-19 pandemic. In 1991, Ruscetti received the Distinguished Service Award from the National Institutes of Health.

Dr. Ruscetti offers a true insider’s portrait of nearly four decades at the center of public health. His insights into the successes and failures of government science will be eye-opening to the general public. You will read never-before-revealed information about the personalities and arguments which have been kept from view behind the iron curtain of public health. Can we say our scientists are protecting us, or is another agenda at work? For most of his decades at the National Cancer Institute, Dr. Ruscetti has been in almost daily contact with his long-time collaborator, Dr. Mikovits, and their rich intellectual discussions will greatly add to our national discussion. Science involves a rigorous search for truth, and you will come to understand how science scholars are relentless in their quest for answers.
Francis W. Ruscetti, PhD has had a lifelong love affair with scientific discovery and participated in several seminal discoveries. In 1975, while a fellow at University of Pittsburgh, he discovered Interleukin-5. In 1978 at National Cancer Institute (NCI), Dr. Ruscetti's team discovered interleukin 2 (T-Cell Growth factor), for which they won a team award from the Society for Immunotherapy of Cancer. In 1980, the team he directed at the NCI isolated the first known disease-causing human retrovirus, HTLV-1, opening the field of human retrovirology, which would rise to critical importance during the HIV-AIDS epidemic. During the 1980s, his team identified IL-15, an additional immune response regulator. In hematology, his team demonstrated that human cord blood cells proliferate continuously in vitro and TGF Beta functions as a bidirectional regulator of the hematopoietic stem cell. These discoveries have all been the basis for the development of useful therapeutics.

In 2013, the IL-2 manuscript was recognized by the American Association of Immunologists as the second most important paper published in their Journal in the past hundred years. Similarly, the HTLV-1 manuscript was cited as one of the thirty most important papers in the hundred years of the publication in Proceedings of the National Academy of Science. Dr. Ruscetti received the "Distinguished Service Award" from the National Institutes of Health. In order to develop new antiviral drugs, Ruscetti and Dr. Mikovits work on understanding the contribution of inflammatory pathways in disease, specifically how retroviruses dysregulate DNA methylation. In 2009, they identified a new family of retroviruses, the XMRVs from patients with chronic fatigue syndrome (ME/CFS). After thirty-nine years at the National Cancer Institute, Dr. Ruscetti retired in 2013, with more than 325 publications. Since his retirement, he has been consulting with patients and their families, continuing his lifelong effort to understand the process of chronic disease development and develop therapeutic treatment strategies.

Dr. Judy A. Mikovits spent twenty years at the National Cancer Institute, working with Dr. Francis W. Ruscetti, one of the founding fathers of human retrovirology, and has coauthored more than forty scientific papers. She co-founded and directed the first neuroimmune disease institute using a systems biology approach in 2006. Dr. Mikovits lives in Southern California with her husband, David.

Kent Heckenlively, JD, is an attorney, science teacher, and New York Times bestselling author. During college Heckenlively worked for US Senator Pete Wilson, and in law school he was a writer and an editor of the school’s law review and spent his summers working for the US Attorney’s Office in San Francisco. Kent and his wife Linda live in Northern California with their two children, Jacqueline and Ben.
“A science book discusses the deplorable state of the field in the United States, the result of bias, greed, and governmental dysfunction. Ruscetti was skeptical of authority in all its forms from an early age and turned to a career in science, hoping that intellectual irreverence would find a home there. But he encountered a professional world dominated by naked careerism, blind dogma, propaganda, and bottomless vindictiveness. The author enjoyed a brilliantly accomplished career as a virologist, working for decades at the National Cancer Institute, and was part of the team that identified the first pathogenic human retrovirus, HTLV-1. While studying AIDS in the 1980s, he worked closely with Anthony Fauci—Ruscetti found him to be as mendacious as he was ambitious. The author claims that Fauci’s neglect and even repression of important research likely slowed down the fight against the deadly disease. Ruscetti convincingly blames governmental malfeasance for establishing a system that permits bureaucrats like Fauci and Robert Gallo—one of the author’s supervisors—to prosper: ‘People like Gallo and Fauci thrive because of a system put in place by President Richard Nixon, in which a few leading government scientists were given unprecedented control over funding decisions, while at the same time creating a subservient class of researchers who must vie for their approval.’ Mikovits tells a similar story, if more personally harrowing—she claims that she was persecuted for her work demonstrating the contamination of blood and vaccine supplies . . . Mikovits’ remembrance is a powerful one and confirms Ruscetti’s account of the scientific community as one plagued by incompetence and venality. Especially during a time in which the authority of that community is a matter of dispute, the two scientists’ book—written with Heckenlively—is an important contribution to a gathering debate. An engrossing exposé of scientific practice in America.”
—KIRKUS REVIEWS

“The final book of the plandemic trilogy is one of the most entertaining, thanks to Judy’s mentor Frank Ruscetti’s deep personal insights on Anthony Fauci. Many other experts are interviewed that bring new light to the unnecessary COVID pandemic. The book reads like a fast-paced thriller and offers a view into the halls of scientific inquiry to which few people are ever privy.”
—DR. MERCOLA, founder of Mercola.com, the most-visited natural health site on the internet for the past twenty years

“Mikovits pulls back the curtain on the twisted world of corrupt, criminal ‘science’ that parades as authoritative fact. If you thought the institution of science was run by honorable, ethical people trying to help humanity, your worldview is about to be shattered by the horrifying truth revealed in Ending Plague.”
—MIKE ADAMS, the Health Ranger, founder of NaturalNews.com

“Most of us have long taken for granted the ability to trust our medical science establishment—until 2020, the year that shattered that confidence. The public health authorities suddenly seemed opaque; their motives suspect. Ending Plague explains what has gone wrong and what must be done to right the ship of medical science.”
—DENNIS PRAGER, radio host of The Dennis Prager Show and writer

“With the renowned trifecta of Dr. Frank Ruscetti, Dr. Judy Mikovits, and legal expert/author Kent Heckenlively, Ending Plague is one of the most important books to study for anyone who cares about health and freedom.”
—MIKKI WILLIS, investigative filmmaker, Plandemic, and author of Plandemic: The Incredible True Story about the Most Banned Documentary in History

“Kent Heckenlively’s brilliant style, combined with the scientific backbone provided by Drs. Frank Ruscetti and Judy Mikovits, has created a ‘mustread’ second bestseller in Ending Plague. It exposes dirty tricks by Big Pharma and scientific research failures, where no stone is unturned while offering a path of hope for science to regain its lost posture as a beacon of truth for humanity.”
—MAX SWAFFORD, author, editor, educator