Dining in the Dark: A Famed Restaurant Critic's Struggle with and Triumph over Depression (Hardcover) 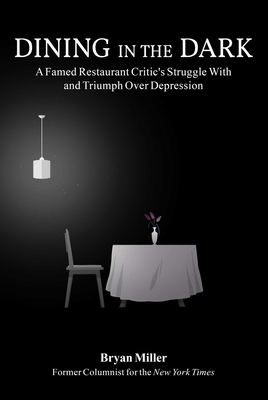 Dining in the Dark: A Famed Restaurant Critic's Struggle with and Triumph over Depression (Hardcover)


Special Order—Subject to Availability
The Rise and Fall of the World’s Most Powerful Restaurant Critic and His Battle with Severe, Debilitating Depression

From the early 1980s to the mid-1990s, Bryan Miller was a household name among restaurant goers in the greater New York City area and beyond as the restaurant critic for the New York Times, as well as the author of numerous books, a public speaker, and a radio and television commentator. Over ten years as a columnist, he dined out more than five thou­sand times in the United States and abroad, from haute to humble. The Wine Spectator, in a front-page profile, declared Miller “the most powerful restaurant critic in America.”

And for much of that time, he wanted to die.

Dining in the Dark chronicles Miller’s battle with Bipolar II disorder, also known as depres­sion, which ruined his life, professionally and personally. Depression was directly responsible for his surrendering the New York Times restau­rant column and, shortly thereafter, leaving the paper altogether. Everything he had worked for so diligently, rising from cub reporter to big-city columnist in less than a decade, vanished. In the ensuing years, unable to work, he lost his home, his life savings, two wonderful wives, the chance to have a family, and numerous friends and colleagues. He became increasingly reclu­sive; like many victims of serious depression, he reached the point where he was afraid to answer the phone. Pile on a brain tumor, electroshock therapy, a near-fatal bout with Lyme disease, accidental drug overdoses (he was once carried out of the newsroom on a gurney), and you have a life in shambles.

Dining in the Dark tells the story of Miller’s battle, but it also brings hope by sharing his jour­ney to coping with, and finally conquering, his depression. The coping mechanisms he employed in order to get through the day will be of benefit to those in need of a helping hand. Dining in the Dark is philosophical, inspirational, educational, and even humorous at times. And, of course, there are lots of inside-the-New York Times anecdotes, as well as lots of food, wine, travel, and celebrity.
Bryan Miller is a writer, editor, author, inter­net journalist, and educator. He has worked as a news reporter, features writer, news editor, writing teacher, and food specialist for a num­ber of newspapers, magazines, and online city guides. From 1981 to 1996, he was a reporter and columnist for the New York Times. The author and co-author of nine books, Miller has garnered numerous honors, including the pres­tigious James Beard Foundation’s Lifetime Achievement Award. He lives in Westchester County, New York.

“Beloved for his legendary dispatches from America’s greatest restaurants, Bryan Miller brings us the greatest story yet: that of his inspiring journey to triumph over personal hardships with the lessons we can all learn through the power of food.”
—JOSÉ ANDRÉS, world-renowned chef, restaurateur, author, humanitarian, and recipient of the Courage and Civility Award from Jeff Bezos

“Dining in the Dark is a very personal, touching, honest, and sad account of Bryan’s slow decent into mental illness, as well as his struggle, and eventual recovery.”
—JACQUES PEPIN, chef, author, and television personality

“A page-turner from Bryan Miller—one of our era’s greatest restaurant critics, courageously disclosing the emotional torture he was privately enduring, all while sharing the pleasures of the table with the rest of us. Alternately winsome and heartbreaking, and always deeply genuine, Dining in the Dark comes as close to anything I’ve read to providing a brain’s eye view of what it feels like to live with and to survive deep depression.”
—DANNY MEYER, restaurateur and author of Setting the Table: The Transforming Power of Hospitality in Business

“By the very nature of their work, most restaurant critics reveal little about themselves. That makes Bryan Miller’s book, Dining in the Dark, a rare read. With the keen observations and pointed prose of a well-crafted review, Miller offers an intimate account of the decline of his own mental health, the personal and professional devastation it wrought, and his struggles to get to the other side.”
—THOMAS KELLER, chef/proprietor of The French Laundry