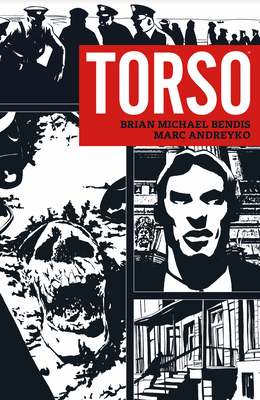 
Not On Our Shelves—Ships in 1-5 Days
The true story of the hunt for America's first serial killer!

Cleveland. 1935. Eliot Ness, fresh from his legendary Chicago triumph over Al Capone and associates, set his sights on Cleveland. He went on a crusade that matched, and sometimes even surpassed, his past accomplishments. But dismembered body parts started washing up in a concentrated area of Lake Erie Sound. Headless torsos that left no clues to their identity or reason for death. Eliot Ness and his colorful gang of The Unknowns chased this killer through the underbelly of Cleveland for years. As far as the public was concerned, he was never captured. But what really happened is even more shocking.

This 1999 Eisner Award-winner for Comic Book Excellence is re-designed in this latest edition to the Dark Horse/Jinxworld library!

Brian Michael Bendis is an American comic book writer and artist. He has won five Eisner Awards for both his creator-owned work and his work on various Marvel Comics books. Starting with crime and noir comics, Bendis eventually moved to mainstream superhero work. With Bill Jemas and Mark Millar, Bendis was the primary architect of the Ultimate Marvel Universe, launching Ultimate Spider-Man in 2000. He relaunched the Avengers franchise with New Avengers in 2004, and has also written the Marvel "event" storylines "Secret War" (2004–2005), "House of M" (2005), "Secret Invasion" (2008), "Siege" (2010) and "Age of Ultron" (2013). In addition to writing comics, Brendis has worked in television, video games and film. He has also taught courses on Graphic Novels at University of Oregon and Portland State University. In 2014, Bendis wrote Words for Pictures: The Art and Business of Writing Comics and Graphic Novels, a book about comics published by Random House.