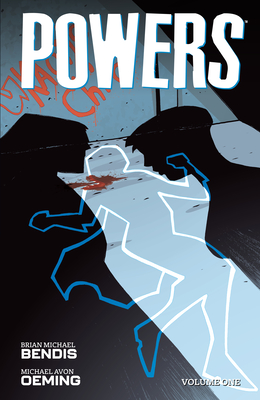 
On Our Shelves Now at:
In a world where superheroes soar through the sky, follow homicide detectives Christian Walker and Deena Pilgrim on the dirty city streets below. Assigned to the "powers" special cases, they will face the worst their city has to offer.

The shocking murder of America's superhero sweetheart, Retro Girl, has the world in mourning. The investigation takes Walker and Pilgrim from the city's seedy underbelly to the gleaming towers that are home to immortal beings. As shocking truths about Retro Girl come to light, Walker finds that to solve this crime, he might have to reveal his own dark secret.

Collecting Powers #1–#11, the complete Powers comic strips from Comic Shop News, the Powers Coloring/Activity Book, a treasure trove of behind-the-scenes content from the making of this superhero-noir classic, and a brand-new cover by Michael Avon Oeming!

Brian Michael Bendis is an American comic book writer and artist. He has won five Eisner Awards for both his creator-owned work and his work on various Marvel Comics books. Starting with crime and noir comics, Bendis eventually moved to mainstream superhero work. With Bill Jemas and Mark Millar, Bendis was the primary architect of the Ultimate Marvel Universe, launching Ultimate Spider-Man in 2000. He relaunched the Avengers franchise with New Avengers in 2004, and has also written the Marvel "event" storylines "Secret War" (2004–2005), "House of M" (2005), "Secret Invasion" (2008), "Siege" (2010) and "Age of Ultron" (2013). In addition to writing comics, Brendis has worked in television, video games and film. He has also taught courses on Graphic Novels at University of Oregon and Portland State University. In 2014, Bendis wrote Words for Pictures: The Art and Business of Writing Comics and Graphic Novels, a book about comics published by Random House.