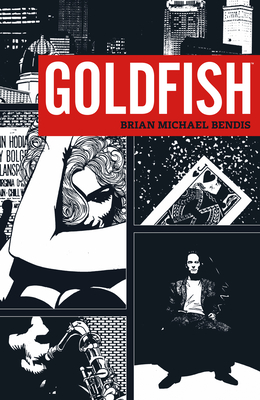 
On Our Shelves Now at:
A modern noir tale of sin, revenge, and redemption, written and illustrated by Brian Michael Bendis, the New York Times bestselling, Peabody and multi-Eisner award-winning co-creator of Miles Morales, Naomi, Jessica Jones, and POWERS!

After years away, con man David Gold returns to the city he once called home and finds nothing as it was. But the man known as “Goldfish” has come back for one reason, and one reason only: his son. This enigmatic grifter returns to his old haunts to find his old flame practically running the city's underbelly. His oldest friend and ex-partner in crime a police detective. The town itself seems to have turned on him. With everything going against him, how can Goldfish reclaim the only person that he still cares about?

Written and illustrated by the legendary New York Times best-selling author Brian Michael Bendis, Jinxworld and Dark Horse release an all-new edition of one of his grittiest works ever!


Brian Michael Bendis is an American comic book writer and artist. He has won five Eisner Awards for both his creator-owned work and his work on various Marvel Comics books. Starting with crime and noir comics, Bendis eventually moved to mainstream superhero work. With Bill Jemas and Mark Millar, Bendis was the primary architect of the Ultimate Marvel Universe, launching Ultimate Spider-Man in 2000. He relaunched the Avengers franchise with New Avengers in 2004, and has also written the Marvel "event" storylines "Secret War" (2004–2005), "House of M" (2005), "Secret Invasion" (2008), "Siege" (2010) and "Age of Ultron" (2013). In addition to writing comics, Brendis has worked in television, video games and film. He has also taught courses on Graphic Novels at University of Oregon and Portland State University. In 2014, Bendis wrote Words for Pictures: The Art and Business of Writing Comics and Graphic Novels, a book about comics published by Random House.