Tales from the Umbrella Academy: You Look Like Death (Deluxe Edition) (Hardcover) 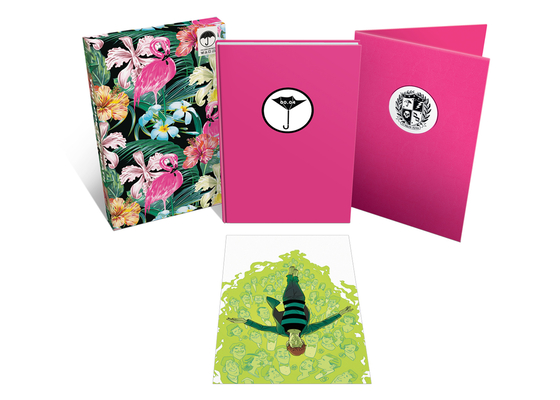 Tales from the Umbrella Academy: You Look Like Death (Deluxe Edition) (Hardcover)


Not On Our Shelves—Ships in 1-5 Days
(This book cannot be returned.)
The first Umbrella Academy tie-in series!

This oversized hardcover collects issues #1–#6 of You Look Like Death as well as a brand new eight-page Seance story (exclusive to the hardcover editions) an expanded sketchbook section, and a foreword by Robert Sheehan, portrayer of Klaus in the hit Netflix series, now on Season 3!

The Deluxe format also includes a slipcase designed by Tony Ong and a portfolio containing an exclusive print by I.N.J. Culbard!

When 18-year-old Klaus gets himself kicked out of the Umbrella Academy and his allowance discontinued, he heads to a place where his ghoulish talents will be appreciated—Hollywood.

But after a magical high on a stash stolen from a vampire drug lord, Klaus needs help, and doesn't have his siblings there to save him.

Umbrella Academy creators Gerard Way and Gabriel Bá are joined by Way's Killjoys cowriter Shaun Simon (Collapser) and artist I.N.J. Culbard (Everything), for a supernatural adventure featuring the breakout character from the hit Netflix show!
Gerard Way is a singer, songwriter, and comic book writer who is perhaps best known as the lead singer of the band My Chemical Romance. With My Chemical Romance, Way found fame and acclaim and toured with the band from 2001 to 2013. In addition to his music, Way is the Eisner Award–winning writer of The Umbrella Academy and The True Lives of the Fabulous Killjoys.

You can learn more about Way and his art at gerardway.com.