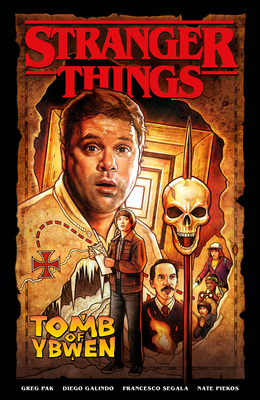 
In Stock—Click for Locations
It’s January 1985 the Hawkins crew survived their battle with the mind flayer, but Will and Joyce are still reeling from the recent death of Bob Newby.

Will’s friends have been too busy with their girlfriends to notice how much he is struggling. After he and Mr. Clarke discover a mysterious map Bob left in a box of old nerdy memorabilia, Will rallies the crew to investigate—but with a blizzard coming, they’re afraid to follow.

When Mike, Dustin and Lucas learn that Will has taken off into the freezing wilds alone they rush to stop him. When they all discover there may be more to this adventure than a fake treasure map, it’s too late to turn back. They have no choice but to follow the clues further into an abandoned mine shaft full of booby traps and mystery.

Join the heroes of the hit Netflix show on a new adventure full of curiosity and danger, and discover what treasure might lay in the depths of the Tomb of Ybwen. Penned by seasoned comic writer Greg Pak(Stranger Things: Zombie Boys, Planet Hulk) with photorealistic art drawn by Diego Galindo (Stranger Things and Dungeons & Dragons).

Greg Pak is a comic book writer and filmmaker best known for Action Comics and Batman/Superman for DC Comics, Planet Hulk and Magneto Testament for Marvel Comics, and the Code Monkey Save World graphic novel and The Princess Who Saved Herself children's book, based on the songs of Jonathan Coulton. He directed the award-winning feature film Robot Stories and dozens of shorts, including Happy Fun Room. He was named one of 25 Filmmakers to Watch by Filmmaker Magazine, described as "a talent with a future" by the New York Times, and named Breakout Talent of the year by Wizard Magazine. Pak also co-wrote the fan favorite Incredible Hercules series with Fred Van Lente, with whom he also wrote the new how-to book, Make Comics Like the Pros. The author lives in New York, New York.