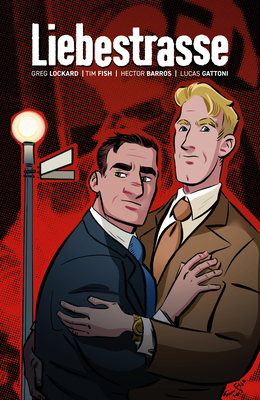 
On Our Shelves Now at:
Nominated for Outstanding Comic by the GLAAD Media Awards, Liebestrasse tells the heart-wrenching, poignant tale of forbidden love and survival through the rise of hatred.

During the final years of the Weimar Republic, Sam, an American banker, meets Philip, a German art critic, and they fall in love. Their romance is hit with an unspeakable reality as the Nazis come to power and fascism makes them a target.

Debut writer Greg Lockard (Where We Live Las Vegas Shooting Benefit Anthology) and artist Tim Fish (Saved by the Bell, Cavalcade of Boys) prove that even through the harshest conditions, love will find a way to thrive.

“Liebestrasse feels like an extremely needed graphic novel that has a lot of lessons that are still relevant and timely today.”–PRIDE

“The real strength of Liebestrasse: it's a simple and quiet period piece that starkly juxtaposes our current political climate, while also being eerily similar in ways that are all too easy to forget. These parallels are not an explicit part of the story, but they don't have to be—the bare facts of the reality faced by these queer men makes their story even more frighteningly relevant.”–Boing Boing

Greg Lockard is a writer and editor of comic books and related media.
Liebestrasse is a historical fiction graphic novel that Greg co-created with artist Tim Fish for ComiXology Originals. It was nominated as an “Outstanding Comic Book” for the 2020 GLAAD Media Awards and listed by the New York Times as one of 10 Comic Books to Celebrate Pride.

As a freelance comic book editor, his client list includes ComiXology Originals, Offset Comics, and Image Comics. He is also currently working as a Development Editor and Narrative Designer for Einhorn’s Epic Productions in fictional podcasts, graphic novels, and other related media.

Prior to working independently, Greg edited for the Vertigo imprint at DC Comics. He worked on numerous titles including DIAL H, The Unwritten, FBP: Federal Bureau of Physics, Sweet Tooth, iZombie, The Kitchen, Fables, Fairest, and American Vampire.