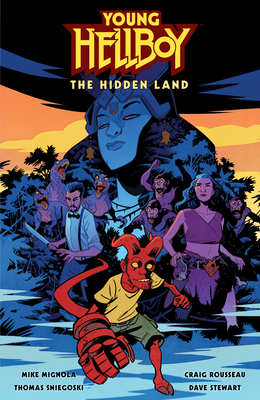 
Not On Our Shelves—Ships in 1-5 Days
Even when Big Red was little, he had no shortage of daring adventures. Join Hellboy creator Mike Mignola as he teams with writer Tom Sniegoski, artist Craig Rousseau, and colorist Dave Stewart to bring you a tale of Hellboy's childhood, collected in a gorgeous hardcover edition!

Stranded on a strange island after a mishap on their way to a South American dig site, Hellboy and Professor Bruttenholm are confronted by all manner of monsters on land, sea, and sky! A stranger who rescues them turns out to be one of Hellboy's heroes, but they still aren't as safe as they think they are! An old evil that the island protects is about to reawaken, drawing Hellboy and his new allies into a desperate battle!
Mike Mignola's fascination with ghosts and monsters began at an early age; reading Dracula at age twelve introduced him to Victorian literature and folklore, from which he has never recovered. Starting in 1982 as a bad inker for Marvel Comics, he swiftly evolved into a not-so-bad artist. By the late 1980s, he had begun to develop his own unique graphic style, with mainstream projects like Cosmic Odyssey and Batman: Gotham by Gaslight. In 1994, he published the first Hellboy series through Dark Horse. There are thirteen Hellboy graphic novels (with more on the way), several spin-off titles (B.P.R.D., Lobster Johnson, Abe Sapien, and Sir Edward Grey: Witchfinder), prose books, animated films, and two live-action films starring Ron Perlman. Along the way he worked on Francis Ford Coppola's film Bram Stoker's Dracula (1992), was a production designer for Disney's Atlantis: The Lost Empire (2001), and was the visual consultant to director Guillermo del Toro on Blade II (2002), Hellboy (2004), and Hellboy II: The Golden Army (2008). Mike's books have earned numerous awards and are published in a great many countries. Mike lives in Southern California with his wife, daughter, and cat.