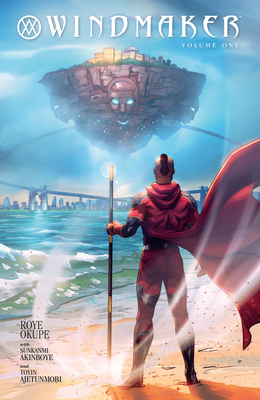 
In Stock—Click for Locations
After an unprecedented era of peace and prosperity, the fictional West African nation of Atala is thrust into an era of unrest and dysfunction when their beloved president turns vicious dictator.

With the country on the brink of civil war, the WindMaker—an ancient hero of the Atalians— mysteriously returns in what appears to be an effort to save his people. The only problem is that his spirit is reincarnated into the last person anyone expects to help—the president's head of security!

Born in Lagos, Nigeria, Roye Okupe is an award-winning filmmaker, author, speaker and entrepreneur whose passion for comics and animation led him to found YouNeek Studios in 2012. Under that umbrella, Roye wrote, produced and directed several animated productions including, but not limited to, the award-winning and critically acclaimed Malika – Warrior Queen Animated Short.

These productions have allowed Roye to attain many prestigious recognitions such as being #5 on Ventures Africa’s list of 40 African innovators to watch (2016) as well as being part of NewAfrican Magazines’ 100 most influential Africans two years in a row (2016 & 2017). In August 2015, Roye's debut graphic novel: E.X.O. The Legend of Wale Williams Part One was received with critical acclaim and has since been featured on CNN, Forbes, The New York Times, NBC, The Guardian, ABC7, BBC, The Huffington Post, Mashable and more!