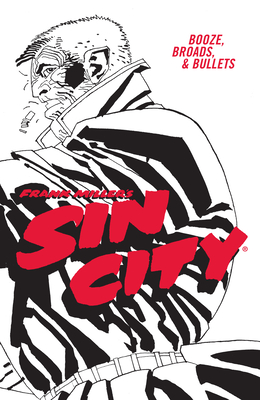 
On Our Shelves Now at:
Stories of those lost in the gritty and crime-laden asphalt jungle are together in this collection from the acclaimed noir, presented at original size with new wrap-around cover art by Frank Miller.

There are all kinds of dark business you might encounter on a cold night in Basin City, and the tales here paint a gloriously dirty portrait. Marv, the hulking ex-con with a condition, has to jog his memory about a certain Saturday night, and then on another evening, he’s after something but he keeps his quest is quiet—sometimes there’s no need for words. Visiting Old Town, where all your dreams could come true, Gail and Miho demonstrate what happens when you don’t play by their rules. Then, hired-hand Blue Eyes makes an important kill—a few, actually. A woman on the run finds a way out . . .  A sucker with good intentions gets duped . . . Fat Man and Little Boy are seen on a couple of jobs, and being low-rent hit-men, you can guess what that means. And the dark deeds and dealings stay dark in a few more stories also included in this anthology.

The fourth editions of Frank Miller’s hit graphic novel series continue with Volume 6 Booze, Broads, & Bullets. This edition includes a fourteen-page expanded cover and art gallery featuring pieces from previous editions. As an anthology of short tales, it’s a great jumping on point for new readers wondering what Sin City is all about—or longtime readers who can't get enough!

Frank Miller began his career in comics in the late 1970s, first drawing then writing Daredevil for Marvel Comics, creating what was essentially a crime comic disguised as a superhero book. It was on Daredevil that Miller gained notoriety, honed his storytelling abilities, and took his first steps toward becoming a giant in the comics medium. After Daredevil came Ronin, a science-fiction samurai drama that seamlessly melded Japanese and French comics traditions into the American mainstream; and after that, the groundbreaking and acclaimed Batman: The Dark Knight Returns and Batman: Year One, both of which not only redefined the classic character, but also revitalized the industry itself. Finally able to fulfill his dream of doing an all-out, straight-ahead crime series, Miller introduced Sin City in 1991. Readers responded enthusiastically to Miller's tough-as-leather noir drama, creating an instant sales success. His multi-award-winning 300 series from Dark Horse, a telling of history's most glorious and underreported battle, was brought to full-blooded life in 1998. In 2001, Miller returned to the superhero genre with the bestselling Batman: The Dark Knight Strikes Again. Frank Miller continues to push the medium into new territories, exploring subject matter previously untouched in comics, and his work consistently receives the highest praise from his industry peers and readers everywhere. In 2005, with the hugely successful Sin City movie release, codirected with Robert Rodriguez, Miller added a director's credit to his already impressive résumé and introduced his characters to an entirely new legion of fans worldwide.