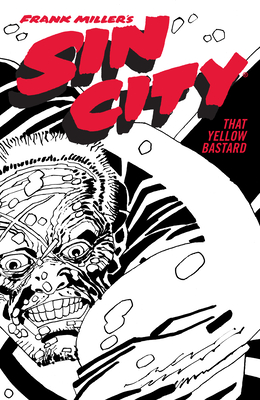 
On Our Shelves Now at:
The last honorable detective in the police force fights against corruption in this volume of the acclaimed crime noir, presented at original size with new wrap-around cover art by Frank Miller.

It’s his last day on the job and honest Detective John Hartigan has one loose end left to tie up. Little Nancy Callahan, age eleven, has been kidnapped by a lunatic who likes to hear little girls scream. Nancy isn’t his first victim, and she won’t be his last—unless Hartigan can put a stop to him, no matter how important the heinous psycho’s father is. But this case is drowning in more perversion than even Hartigan realized . . . If justice is possible in this city, this man is going to start his retirement with justice.

The fourth editions of Frank Miller’s hit graphic novel series continue with Volume 4 That Yellow Bastard. This edition does include the pinup gallery from previous editions, with art from Mike Allred, Kyle Baker, Jeff Smith, and Bruce Timm. And, also included is an eighteen-page expanded gallery of covers and back covers from previous editions. Devoted fans and new readers can again experience the groundbreaking and unparalleled noir masterpiece that has engrossed readers for nearly three decades!

Frank Miller began his career in comics in the late 1970s, first drawing then writing Daredevil for Marvel Comics, creating what was essentially a crime comic disguised as a superhero book. It was on Daredevil that Miller gained notoriety, honed his storytelling abilities, and took his first steps toward becoming a giant in the comics medium. Next came Ronin, a science-fiction samurai drama that seamlessly melded Japanese and French comics traditions into the American mainstream; and then the groundbreaking and acclaimed Batman: The Dark Knight Returns and Batman: Year One, both of which not only redefined the classic character, but also revitalized the industry itself. Finally able to fulfill his dream of doing an all-out, straight-ahead crime series, Miller introduced Sin City in 1991. Readers responded enthusiastically to Miller's tough-as-leather noir drama, creating an instant sales success. His multi-award-winning 300 series from Dark Horse, a telling of history's most glorious and underreported battle, was brought to full-blooded life in 1998. In 2001, Miller returned to the superhero genre with the best-selling Batman: The Dark Knight Strikes Again.
Frank Miller continues to push the medium into new territories, exploring subject matter previously untouched in comics, and his work consistently receives the highest praise from his industry peers and readers everywhere. In 2005, with the hugely successful Sin City movie release, co-directed with Robert Rodriguez, Miller added a director's credit to his already impressive resumé and introduced his characters to a new legion of fans worldwide.