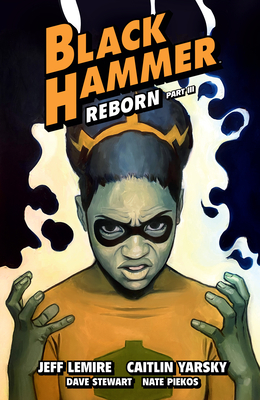 
Not On Our Shelves—Ships in 1-5 Days
The Eisner Award–winning superhero saga returns in this ongoing series picking up twenty years later with artist Caitlin Yarsky.

Things have gotten crazy in Black Hammer! First a parallel Spiral City collided with the actual one spawning a multiverse nightmare of heroes and villains from both worlds going to war, and now Lucy Weber picks back up the mantle of Black Hammer and teams up with Skulldigger for answers on how to end the madness.


Black Hammer: Reborn is the next era of the Black Hammer Universe; a twelve-issue series by Jeff Lemire, Caitlin Yarsky, Malachi Ward, and Matthew Sheean that juxtaposes an achingly human story of domestic life, marriage, parenthood, and destiny with a pulse-pounding superhero thriller that peels back new layers of mystery, and pulls the Black Hammer history into the present.

Collects Black Hammer: Reborn #9–#12.
New York Times bestselling author, Jeff Lemire, is the creator of the acclaimed graphic novels Sweet Tooth, Essex County, The Underwater Welder and Trillium. His upcoming projects include the original graphic novel Roughneck from Simon and Schuster, as well as the sci-fi series Descender for Image Comics (with Dustin Nguyen) and Black Hammer for Dark Horse Comics (with Dean Ormston). Jeff has also written Green Arrow, Justice League and Animal Man for DC Comics and Hawkeye for Marvel Comics. In 2008 and in 2013 Jeff won the Schuster Award for Best Canadian Cartoonist. He has also received The Doug Wright Award for Best Emerging Talent and the American Library Association's prestigious Alex Award, recognizing books for adults with specific teen appeal. He has also been nominated for 8 Eisner awards, 7 Harvey Awards and 8 Shuster Awards. In 2010 Essex County was named as one of the five Essential Canadian Novels of the Decade. He currently lives and works in Toronto with his wife and son.
"Amazing. Just flat-out amazing."—Patton Oswalt

"I don't read many comics these days, and I can't remember the last time I read a superhero comic, but I'm loving Black Hammer."—Mike Mignola

"Black Hammer is easily one of Lemire's best creations."—Scott Snyder