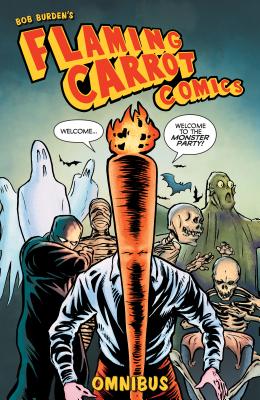 Before there ever was a Deadpool, Twin Peaks, or Lady Gaga; the Flaming Carrot's madcap madness, manic mayhem, and impish mischief exploded from the vanguard of the 80s' New Wave comic revolution, taking us right down the rabbit hole of creativity-gone-off-the-tracks, and over the rainbow. Propagating dreamlike surrealism, disturbing violence, sexual adventurism, bar-hopping, and a bizarre and nightmarish costume, the world's first postmodern super man battled Road Hogs From Outer Space, went on drinking binges with Death, bounced around on a nuclear powered pogo stick, and ordered some of that new Brussels sprout flavored ice cream that wasn't even on the menu yet.

Check out a comic book series that for many years most people believed to be nothing more than a ridiculous legend or an amusing joke. Doctor recommended. Maximum strength formula. New hope for a nation suffocating in the swill of its own mediocrity.