Our Encounters with Evil: Adventures of Professor J.T. Meinhardt and His Assistant Mr. Knox (Hardcover) 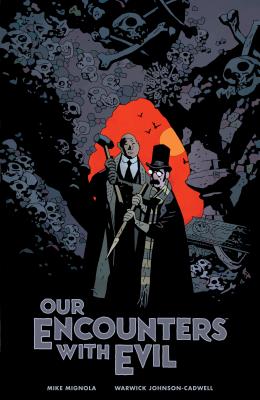 Our Encounters with Evil: Adventures of Professor J.T. Meinhardt and His Assistant Mr. Knox (Hardcover)


Special Order—Subject to Availability
Mr. Higgins was just the beginning!

Follow Professor J.T. Meinhardt and Mr. Knox as they continue their pursuit of ne'er-do-well creatures of the night! Backed by the dauntless vampire hunter Ms. Mary Van Sloan, the heroes of Mr. Higgins Comes Home pursue vampires, werewolves, and other horrors that even they are hard-put to name or explain. The only thing that's for certain is that the strange truths these adventurers uncover are seldom what they seem.

From the horror-genius minds of Mike Mignola and Warwick Johnson-Cadwell comes the next installment of endearingly terrifying tales from Meinhardt, Knox, and Van Sloan. Set against the detailed and stylized background of Johnson-Cadwell's art, these stories are a striking continuation of daring occult adventure! Grab some garlic and silver bullets, and settle in for a thrilling read!
Mike Mignola's fascination with ghosts and monsters began at an early age; reading Dracula at age twelve introduced him to Victorian literature and folklore, from which he has never recovered. Starting in 1982 as a bad inker for Marvel Comics, he swiftly evolved into a not-so-bad artist. By the late 1980s, he had begun to develop his own unique graphic style, with mainstream projects like Cosmic Odyssey and Batman: Gotham by Gaslight. In 1994, he published the first Hellboy series through Dark Horse, and several spin-off titles (B.P.R.D., Lobster Johnson, Abe Sapien, and Sir Edward Grey: Witchfinder), prose books, animated films, and two live-action films starring Ron Perlman. Along the way he worked on Francis Ford Coppola's film Bram Stoker's Dracula (1992), was a production designer for Disney's Atlantis: The Lost Empire (2001), and was the visual consultant to director Guillermo del Toro on Blade II (2002), Hellboy (2004), Hellboy II: The Golden Army (2008), and the upcoming Hellboy film. Mike's books have earned numerous awards and are published in a great many countries. Mike lives in Southern California with his wife, daughter, and cat.