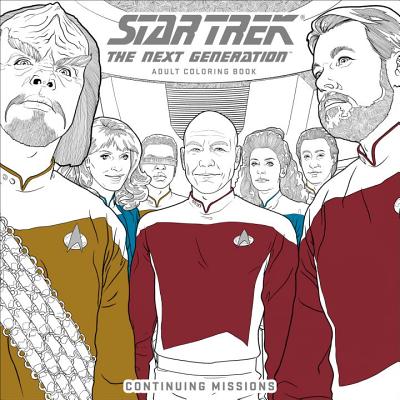 
The crew of the U.S.S. Enterprise NCC-1701-D has only just begun to explore the far reaches of space. Now you can color their journey in any way that you choose! Join your favorite characters for another voyage with Star Trek: The Next Generation Adult Coloring Book--Continuing Missions! Featuring unique, highly detailed black and white illustrations inspired by unforgettable episodes like "Darmok," "The Inner Light," and "Chain of Command," this collection of beautifully illustrated images is a must have for Star Trek fans everywhere!

The second volume of the official Star Trek: The Next Generation coloring book!

Purchase alone or alongside the Star Trek: The Original Series Volume 2 coloring book for a matching set!

You can learn more about CBS at cbscorporation.com.