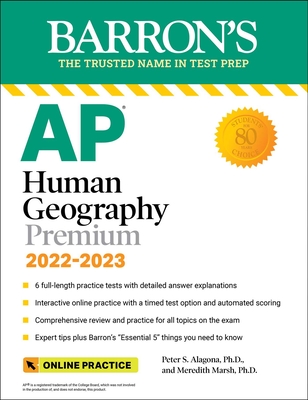 
On Our Shelves Now at:
Power up your study sessions with Barron's AP Human Geography on Kahoot!-- additional, free prep to help you ace your exam!

Be prepared for exam day with Barron’s. Trusted content from AP experts!

Be Confident on Exam Day

About the Authors:
Meredith Marsh, Ph.D. (Bakersfield, MO) Received her bachelor’s degree in geography from Calvin College in 1999, her Master’s Degree in geography from the University of California, Santa Barbara (UCSB) in 2003, and her Ph.D. (also in geography) from UCSB in 2009. Meredith has worked as a Reader for the APHG exam for the past several years  and she is currently an associate professor of geography at Lindenwood University in St. Charles, Missouri.

About the Publisher
In the 1930s, Manuel H. Barron opened a bookstore in Brooklyn, New York.

People from the community asked Mr. Barron about books that might be available to help their children study for the New York State Regents exams. After realizing there wasn't anything available, Mr. Barron created his own study guides.

80 years later, Barron's has helped millions of people prepare for their next step.