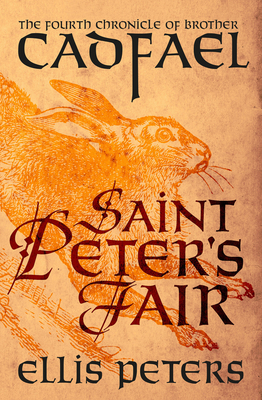 
Not On Our Shelves—Ships in 1-5 Days
In the twelfth century, merchants gather at a summertime fair--but when one of them is found dead in a river, a crime-solving monk must step in. St. Peter's Fair is a grand, festive event, attracting merchants from across England and beyond. There is a pause in the civil war racking the country in the summer of 1139, and the fair promises to bring some much-needed gaiety to the town of Shrewsbury--until the body of a wealthy merchant is found murdered in the river Severn. Was Thomas of Bristol the victim of murderous thieves? And, if so, why were his valuables abandoned nearby? Brother Cadfael, that shrewd but kindly monk, offers to help the merchant's lovely niece Emma. But while he is searching for the killer, Thomas of Bristol's wares are ransacked and two more men are murdered. Emma almost certainly knows more than she is telling--as others will soon realize. Cadfael desperately races to save the young girl, knowing that in a country at war with itself, betrayal can come from any direction, and even good intentions can kill.
Ellis Peters is a pseudonym of Edith Mary Pargeter (1913-1995), a British author whose Chronicles of Brother Cadfael are credited with popularizing the historical mystery. Cadfael, a Welsh Benedictine monk living at Shrewsbury Abbey in the first half of the twelfth century, has been described as combining the curious mind of a scientist with the bravery of a knight-errant. The character has been adapted for television, and the books drew international attention to Shrewsbury and its history. Pargeter won an Edgar Award in 1963 for Death and the Joyful Woman, and in 1993 she won the Cartier Diamond Dagger, an annual award given by the Crime Writers' Association of Great Britain. She was appointed officer of the Order of the British Empire in 1994, and in 1999 the British Crime Writers' Association established the Ellis Peters Historical Dagger award, later called the Ellis Peters Historical Award.