Winning and Losing the Nuclear Peace: The Rise, Demise, and Revival of Arms Control (Hardcover) 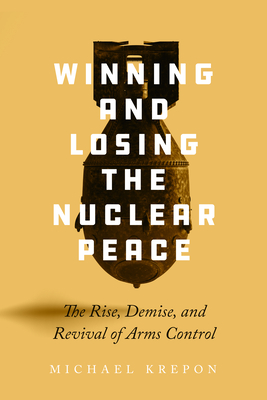 Winning and Losing the Nuclear Peace: The Rise, Demise, and Revival of Arms Control (Hardcover)

The definitive guide to the history of nuclear arms control by a wise eavesdropper and masterful storyteller, Michael Krepon.

The greatest unacknowledged diplomatic achievement of the Cold War was the absence of mushroom clouds. Deterrence alone was too dangerous to succeed; it needed arms control to prevent nuclear warfare. So, U.S. and Soviet leaders ventured into the unknown to devise guardrails for nuclear arms control and to treat the Bomb differently than other weapons. Against the odds, they succeeded. Nuclear weapons have not been used in warfare for three quarters of a century. This book is the first in-depth history of how the nuclear peace was won by complementing deterrence with reassurance, and then jeopardized by discarding arms control after the Cold War ended.

Winning and Losing the Nuclear Peace tells a remarkable story of high-wire acts of diplomacy, close calls, dogged persistence, and extraordinary success. Michael Krepon brings to life the pitched battles between arms controllers and advocates of nuclear deterrence, the ironic twists and unexpected outcomes from Truman to Trump. What began with a ban on atmospheric testing and a nonproliferation treaty reached its apogee with treaties that mandated deep cuts and corralled loose nukes after the Soviet Union imploded.

After the Cold War ended, much of this diplomatic accomplishment was cast aside in favor of freedom of action. The nuclear peace is now imperiled by no less than four nuclear-armed rivalries. Arms control needs to be revived and reimagined for Russia and China to prevent nuclear warfare. New guardrails have to be erected. Winning and Losing the Nuclear Peace is an engaging account of how the practice of arms control was built from scratch, how it was torn down, and how it can be rebuilt.

Michael Krepon is the cofounder of the Stimson Center, a prolific author, and the winner of a lifetime achievement award from the Carnegie Endowment for International Peace for his work to reduce nuclear dangers.