A History of False Hope: Investigative Commissions in Palestine (Paperback) 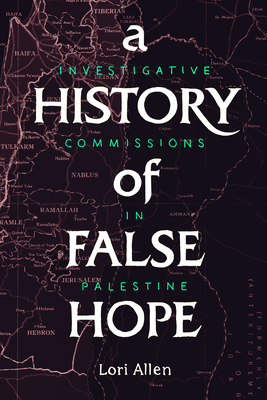 A History of False Hope: Investigative Commissions in Palestine (Paperback)

This book offers a provocative retelling of Palestinian political history through an examination of the international commissions that have investigated political violence and human rights violations. More than twenty commissions have been convened over the last century, yet no significant change has resulted from these inquiries. The findings of the very first, the 1919 King-Crane Commission, were suppressed. The Mitchell Committee, convened in the heat of the Second Intifada, urged Palestinians to listen more sympathetically to the feelings of their occupiers. And factfinders returning from a shell-shocked Gaza Strip in 2008 registered their horror at the scale of the destruction, but Gazans have continued to live under a crippling blockade.

Drawing on debates in the press, previously unexamined UN reports, historical archives, and ethnographic research, Lori Allen explores six key investigative commissions over the last century. She highlights how Palestinians' persistent demands for independence have been routinely translated into the numb language of reports and resolutions. These commissions, Allen argues, operating as technologies of liberal global governance, yield no justice--only the oppressive status quo. A History of False Hope issues a biting critique of the captivating allure and cold impotence of international law.

Lori Allen is Reader in Anthropology at SOAS University of London. She is the author of The Rise and Fall of Human Rights: Cynicism and Politics in Occupied Palestine (Stanford, 2013).