Western Self-Contempt: Oikophobia in the Decline of Civilizations (Hardcover) 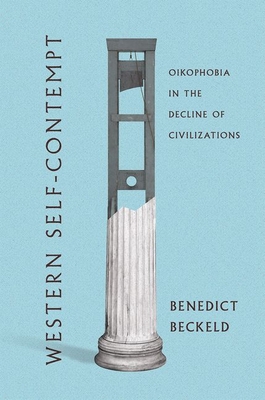 Western Self-Contempt: Oikophobia in the Decline of Civilizations (Hardcover)

Western Self-Contempt travels through civilizations since antiquity, examining major political events and the literature of ancient Greece, Rome, France, Britain, and the United States, to study evidence of cultural self-hatred and its cyclical recurrence. Benedict Beckeld explores oikophobia, described by its coiner Sir Roger Scruton as the felt need to denigrate the customs, culture and institutions that are identifiably 'ours, ' in its political and philosophical applications. Beckeld analyzes the theories behind oikophobia along with their historical sources, revealing why oikophobia is best described as a cultural malaise that befalls civilizations during their declining days.

Beckeld gives a framework for why today's society is so fragmented and self-critical. He demonstrates that oikophobia is the antithesis of xenophobia. By this definition, the riots and civil unrest in the summer of 2020 were an expression of oikophobia. Excessive political correctness that attacks tradition and history is an expression of oikophobia. Beckeld argues that if we are to understand these behaviors and attitudes, we must understand oikophobia as a sociohistorical phenomenon.

Western Self-Contempt is a systematic analysis of oikophobia, combining political philosophy and history to examine how Western civilizations and cultures evolve from na ve and self-promoting beginnings to states of self-loathing and decline. Concluding with a philosophical portrait of an increasingly interconnected Western civilization, Beckeld reveals how past events and ideologies, both in the US and in Europe, have led to a modern culture of self-questioning and self-rejection.

Benedict Beckeld holds a PhD in Philosophy and Classical Philology from the University of Heidelberg, Germany. He is the author of Die Notwendigkeit der Notwendigkeit, Art and Aesthetics, and Statements. Follow him on Twitter @BenedictBeckeld.