The United States of Anonymous: How the First Amendment Shaped Online Speech (Hardcover) 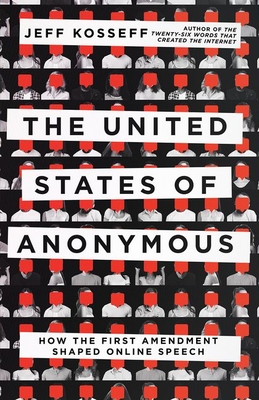 The United States of Anonymous: How the First Amendment Shaped Online Speech (Hardcover)

In The United States of Anonymous, Jeff Kosseff explores how the right to anonymity has shaped American values, politics, business, security, and discourse, particularly as technology has enabled people to separate their identities from their communications.

Legal and political debates surrounding online privacy often focus on the Fourth Amendment's protection against unreasonable searches and seizures, overlooking the history and future of an equally powerful privacy right: the First Amendment's protection of anonymity. The United States of Anonymous features extensive and engaging interviews with people involved in the highest profile anonymity cases, as well as with those who have benefited from, and been harmed by, anonymous communications. Through these interviews, Kosseff explores how courts have protected anonymity for decades and, likewise, how law and technology have allowed individuals to control how much, if any, identifying information is associated with their communications. From blocking laws that prevent Ku Klux Klan members from wearing masks to restraining Alabama officials from forcing the NAACP to disclose its membership lists, and to refusing companies' requests to unmask online critics, courts have recognized that anonymity is a vital part of our free speech protections.

The United States of Anonymous weighs the tradeoffs between the right to hide identity and the harms of anonymity, concluding that we must maintain a strong, if not absolute, right to anonymous speech.

Jeff Kosseff is Associate Professor in the United States Naval Academy's Cyber Science Department and author of the bestselling book, The Twenty-Six Words That Created the Internet. He was a finalist for the Pulitzer Prize for National Reporting and the recipient of the George Polk Award in National Reporting. Follow him on Twitter @jkosseff.