Faith in Freedom: Propaganda, Presidential Politics, and the Making of an American Religion (Hardcover) 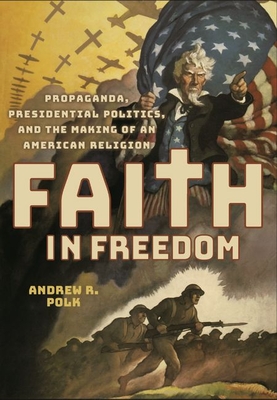 Faith in Freedom: Propaganda, Presidential Politics, and the Making of an American Religion (Hardcover)

In Faith in Freedom, Andrew R. Polk argues that the American civil religion so many have identified as indigenous to the founding ideology was, in fact, the result of a strategic campaign of religious propaganda. Far from being the natural result of the nation's religious underpinning or the later spiritual machinations of conservative Protestants, American civil religion and the resultant Christian nationalism of today were crafted by secular elites in the middle of the twentieth century. Polk's genealogy of the national motto, In God We Trust, revises the very meaning of the contemporary American nation.

Polk shows how Presidents Franklin D. Roosevelt, Harry S Truman, and Dwight D. Eisenhower, working with politicians, advertising executives, and military public relations experts, exploited denominational religious affiliations and beliefs in order to unite Americans during the Second World War and, then, the early Cold War. Armed opposition to the Soviet Union was coupled with militant support for free economic markets, local control of education and housing, and liberties of speech and worship. These preferences were cultivated by state actors so as to support a set of right-wing positions including anti-communism, the Jim Crow status quo, and limited taxation and regulation.

Faith in Freedom is a pioneering work of American religious history. By assessing the ideas, policies, and actions of three US Presidents and their White House staff, Polk sheds light on the origins of the ideological, religious, and partisan divides that describe the American polity today.