Freedomland: Co-Op City and the Story of New York (Hardcover) 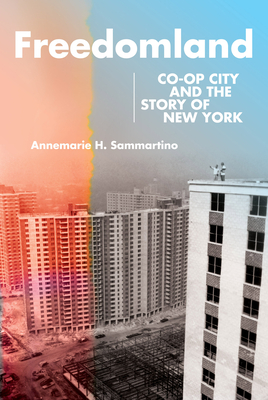 Freedomland: Co-Op City and the Story of New York (Hardcover)

In Freedomland, Annemarie H. Sammartino tells Co-op City's story from the perspectives of those who built it and of the ordinary people who made their homes in this monument to imperfect liberal ideals of economic and social justice.

Located on the grounds of the former Freedomland amusement park on the northeastern edge of the Bronx, Co-op City's 35 towers and 236 townhouses have been home to hundreds of thousands of New Yorkers and is an icon visible to all traveling on the east coast corridor.


In 1965, Co-op City was planned as the largest middle-class housing development in the United States. It was intended as a solution to the problem of affordable housing in America's largest city. While Co-op City first appeared to be a huge success story for integrated, middle-class housing, tensions would lead its residents to organize the largest rent strike in American history. In 1975, a coalition of shareholders took on New York State and, against all odds, secured resident control. Much to the dismay of many denizens of the complex, even this achievement did not halt either rising costs or white flight. Nevertheless, after the challenges of the 1970s and 1980s, the cooperative achieved a hard-won stability as the twentieth century came to a close.

Freedomland chronicles the tumultuous first quarter century of Co-op City's existence. Sammartino's narrative connects planning, economic, and political history and the history of race in America. The result is a new perspective on twentieth-century New York City.
Annemarie H. Sammartino is Professor of History at Oberlin College and Conservatory. She is the author of The Impossible Border.