Eliza Hamilton: The Extraordinary Life and Times of the Wife of Alexander Hamilton (Paperback) 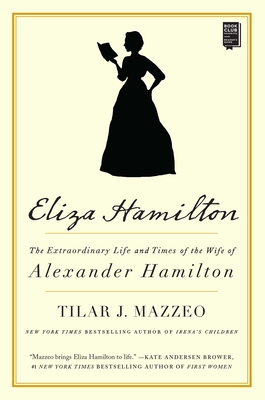 Eliza Hamilton: The Extraordinary Life and Times of the Wife of Alexander Hamilton (Paperback)


Not On Our Shelves—Ships in 1-5 Days
From the New York Times bestselling author of Irena’s Children comes a “vivid, compelling, and unputdownable new biography” (Christopher Andersen, #1 New York Times bestselling author) about the extraordinary life and times of Eliza Hamilton, the wife of founding father Alexander Hamilton, and a powerful, unsung hero in America’s early days.

Fans fell in love with Eliza Hamilton—Alexander Hamilton’s devoted wife—in Lin-Manuel Miranda’s phenomenal musical Hamilton. But they don’t know her full story. A strong pioneer woman, a loving sister, a caring mother, and in her later years, a generous philanthropist, Eliza had many sides—and this fascinating biography brings her multi-faceted personality to vivid life.

This “expertly told story” (Publishers Weekly) follows Eliza through her early years in New York, into the ups and downs of her married life with Alexander, beyond the aftermath of his tragic murder, and finally to her involvement in many projects that cemented her legacy as one of the unsung heroes of our nation’s early days.

This captivating account of the woman behind the famous man is perfect for fans of the works of Ron Chernow, Lisa McCubbin, and Nathaniel Philbrick.
Tilar J. Mazzeo is the New York Times and San Francisco Chronicle bestselling author of books that include The Widow Clicquot, The Secret of Chanel No. 5, and Hotel on the Place Vendôme. She also writes on food and wine for the mainstream press, and her work has appeared in venues such as Food & Wine and in her Back-Lane Wineries guidebook series (Ten Speed Press). Her course on creative nonfiction (Great Courses), featured as in-flight viewing content on Virgin America airlines, is widely distributed and has made her a nationally prominent teacher of writing in nonfiction genres. The Clara C. Piper Associate Professor of English at Colby College, she divides her time among coastal Maine, New York City, and Saanichton, British Columbia, where she lives with her husband and stepchildren.
“In Tilar J. Mazeo's vivid, compelling, and unputdownable new biography, Eliza Hamilton finally takes her place in the pantheon of remarkable American women who, no less than the men they loved, built this nation.”
— —Christopher Andersen, #1 New York Times bestselling author

"Tilar Mazzeo brings Eliza Hamilton to life in this first ever comprehensive biography of a woman who is known solely for the man she married but whose courage and generosity are revealed here. Fast-paced and reads like a novel."
— —Kate Andersen Brower, New York Times bestselling author of First Women

“Tilar Mazzeo has made me fall in love with the enchanting, but refreshingly real Eliza Hamilton. An important portrait of a woman as intriguingly complicated and now as deservedly memorable as her husband.”
— —Stacy Horn, author of Dalmatian Island

“Drawing from an impressive breadth of sources… this is an expertly told story that’s certain to captivate Hamilton fans and intrigue anyone interested in early U.S. history.”
— —Publishers Weekly

"Tilar Mazzeo has given us the profound gift of getting to know more fully the extraordinary woman whose legacy we are honored to carry forward today. Eliza Hamilton inspires!"
— —Jess Dannhauser, president and CEO of Graham Windham