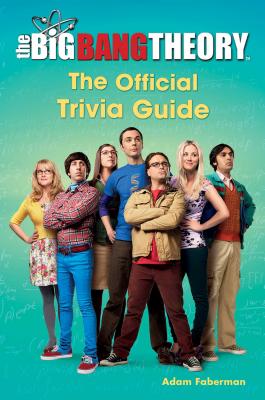 
Not On Our Shelves—Ships in 1-5 Days
This completely authorized Big Bang Theory trivia and quiz book is filled with questions from every season, photos, hilarious quotes, and more, including excerpts from the Roommate Agreement and your chance to play ‘Emily or Cinnamon.’ It’s sure to provide hours of fun and test the knowledge of even the most dedicated fan.

The Big Bang Theory is one of the most popular sitcoms in the world and the funniest show on TV. It is beloved by critics and audiences alike for its quick wit, incredibly geeky but relatable characters, and its science and science fiction storylines. But up until now, there has never been an official Big Bang Theory book.

The Big Bang Theory: The Official Trivia Guide is the book fans have been waiting for. Featuring 1,600 questions, photos, and many of the best quotes from Sheldon, Raj, Penny, Howard, Leonard, Amy, and Bernadette, as well as a complete episode guide, this official book will entertain all Big Bang fans, old and new alike.

Do you know what instrument Leonard plays in the Physics Department String Quartet? Or which award Sheldon is the youngest person to have ever received? Or how about the name of Penny’s avatar in the Age of Conan game? Or who Howard went to couples therapy with? Or the name of Raj’s school? Or when Sheldon does his laundry? Or what Leonard brought Penny back from the North Pole? You don’t need Sheldon’s eidetic memory to enjoy this book, but it might help!