Around the Way Girl: A Memoir (Paperback) 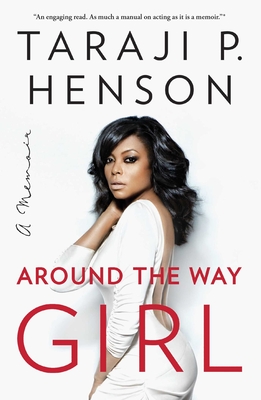 Around the Way Girl: A Memoir (Paperback)


Not On Our Shelves—Ships in 1-5 Days
From Taraji P. Henson, Academy Award nominee, Golden Globe winner, and star of the award-winning film Hidden Figures, comes an inspiring and funny memoir—“a bona fide hit” (Essence)—about family, friends, the hustle required to make it in Hollywood, and the joy of living your own truth.

With a sensibility that recalls her beloved screen characters, including Katherine, the NASA mathematician, Yvette, Queenie, Shug, and the iconic Cookie from Empire, Taraji P. Henson writes of her family, the one she was born into and the one she created. She shares stories of her father, a Vietnam vet who was bowed but never broken by life’s challenges, and of her mother who survived violence both at home and on DC’s volatile streets. Here, too, she opens up about her experiences as a single mother, a journey some saw as a burden but which she saw as a gift.

Around the Way Girl is also a classic actor’s memoir in which Taraji reflects on the world-class instruction she received at Howard University and how she chipped away, with one small role after another, at Hollywood's resistance to give women, particularly women of color, meaty significant roles. With laugh-out-loud humor and candor, she shares the challenges and disappointments of the actor’s journey and shows us that behind the red carpet moments, she is ever authentic. She is at heart just a girl in pursuit of her dreams in this “inspiring account of overcoming adversity and a quest for self-discovery, written with vitality and enthusiasm” (Shelf Awareness).
Born and raised in Washington, DC, Taraji P. Henson graduated from Howard University. She earned a Golden Globe for her role as Cookie in Empire, an Academy Award Nomination for Best Supporting Actress opposite Brad Pitt in David Fincher’s The Curious Case of Benjamin Button, and was a 2011 Emmy nominee for Best Actress in a Movie or Miniseries for Lifetime’s Taken From Me. She also won the 2014 NAACP Image Award for Outstanding Supporting Actress in a Drama Series for her role as Detective Joss Carter in CBS’s Person of Interest. Henson made her singing debut in Hustle & Flow and performed the Academy Award-winning song “It’s Hard Out Here For a Pimp” on the Oscar telecast. She currently resides in Los Angeles with her son and has a strong dedication to helping disabled and less fortunate children. Follow her on Twitter @TheRealTaraji.

Denene Millner is a New York Times bestselling author and frequent contributor to publications such as Essence, NPR, Redbook, and Glamour. In 2008, Millner founded MyBrownBaby, a critically acclaimed and award-winning blog that has worked with top brands, including Disney and Target. She also cohosts Georgia Public Broadcasting’s A Seat at the Table, a talk show about black women; hosts the podcast Speakeasy with Denene, a celebration of the beauty of the African American experience; and makes appearances on the Today show, NPR, and more. Millner has authored thirty-one books, among them Act Like a Lady, Think Like a Man, cowritten with Steve Harvey; Around the Way Girl, a memoir with actress Taraji P. Henson; The Vow, the novel on which the hit Lifetime movie With This Ring was based; and Fresh Princess: Style Rules, the second in a series inspired by Will Smith’s iconic character. Millner is the editorial director of Denene Millner Books, a Simon & Schuster imprint that publishes books featuring African American children and families. In the imprint’s debut year, Crown: An Ode to the Fresh Cut won Newbery and Caldecott Honors and the Kirkus Prize for Children’s Literature. Millner lives in Atlanta with her two daughters and adorable Goldendoodle, Teddy.
“An engaging read. As much a manual on acting as it is a memoir.  . . [with] plenty of inspiration for readers.”
— Library Journal

"Henson's memoir is an inspiring account of overcoming adversity and a quest for self-discovery, written with vitality and enthusiasm”
— Shelf Awareness

"Taraji P. Henson rips the facade off stardom and reveals a woman committed to her family and craft."
— Essence Magazine, Best Books of 2016