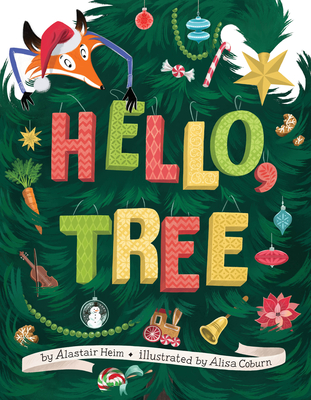 
On Our Shelves Now at:
A thieving, Christmas-loving fox causes holiday madness all around town...until Santa catches him!

Roguish Fox makes Christmas mischief all over town! He takes a tree, a wreath, the carrot from a snowman's nose, Christmas decorations, tons of toys, and tasty treats. Then he settles back at home for a cozy Christmas Eve with all the wonderful items he's "collected." He gets so cozy, in fact, that he falls asleep and almost forgets to prepare for Santa! But as the clock strikes midnight, Santa arrives and scolds naughty Fox, making him put back all the things he stole. On Christmas Day, Fox wakes up groggy, sad, and alone, until he hears the ding-dong of his doorbell. It's Fox's friends from town delivering a snowball right to his face...and also a Christmas tree! The final scene is a warm and bright Christmas party in Fox's home with everyone from town.
Alastair Heim's love for writing started in ninth grade, when a poem that he wrote won second place in a statewide poetry contest. Years later, his then three-year-old daughter began repeating every word he said. This inspired him to write a bedtime story in which they could both participate. Alastair's debut book for Little Bee Books, Love You Too, was published in Fall 2016. He lives in Missouri with his wife and three word-repeating kids.

Alisa Coburn is an illustrator and designer who lives with her family in the English countryside. She loves to draw and color as much as she did when she was a little "piglet," and she can't believe that she gets to do this for a living. Alisa is also the illustrator of Love You Too, a picture book on Little Bee's Fall 2016 list. Find out more about Alisa at alisacoburn.com.