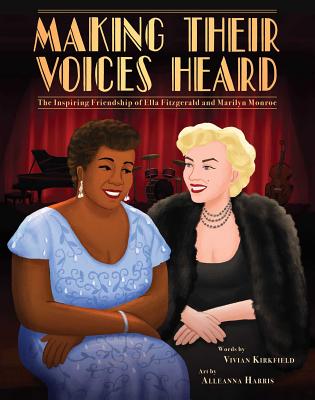 
Not On Our Shelves—Ships in 1-5 Days
The true story of how Ella Fitzgerald and Marilyn Monroe's friendship helped these incredible women overcome prejudice and fulfill their dreams.

"This warm story emphasizes Ella's role in her success, thus avoiding the trap of the white-savior narrative. Many white artists have benefited from imitating black ones; this is the rare narrative to acknowledge that... saturated with color, they capture the iconic looks of the two stars. A good volume to include in a larger conversation about friendship, allyship, and social justice."-Kirkus Reviews

"An inspiring story about 20th-century icons that will be unfamiliar to most young readers."-School Library Journal

"Focusing on the friendship of Ella Fitzgerald and Marilyn Monroe, this picture book highlights the similarities between the two women and the ways in which they helped each other succeed."-Booklist

Ella Fitzgerald's velvety tones and shube-doobie-doos captivated audiences. Jazz greats like Louis Armstrong and Duke Ellington couldn't wait to share the stage with her, but still, Ella could not book a performance at one of the biggest clubs in town--one she knew would give her career its biggest break yet.

Marilyn Monroe dazzled on the silver screen with her baby blue eyes and breathy boo-boo-be-doos. But when she asked for better scripts, a choice in who she worked with, and a higher salary, studio bosses refused.

Two women whose voices weren't being heard. Two women chasing after their dreams and each helping the other to achieve them. This is the inspiring, true story of two incredibly talented women who came together to help each other shine like the stars that they are.
Vivian Kirkfield's career path is paved with picture books. From shelving them in a children's library and reading them with her kindergarteners, to writing them, her goal has always been to help kids become lovers of books and reading. She is the author of many picture books including: Four Otters Toboggan: An Animal Counting Book; Pippa's Passover Plate; From Here to There: Inventions that Changed the Way the World Moves; and Sweet Dreams, Sarah. Her parent-teacher guide, Show Me How! Build Your Child's Self-Esteem Through Reading, Crafting and Cooking is a valuable resource for child-care facilitators. Vivian lives in the quaint New England village of Amherst, New Hampshire, where the old stone library is her favorite hangout and her ten-year-old grandson is her favorite Monopoly partner.
viviankirkfield.com

Alleanna Harris has been drawing for as long as she can remember. As a little kid, she would draw on every page of her mom's legal pads, her notebooks at school, and on the programs at church. She graduated from the University of the Arts with a BFA in animation with honors, and it was during this time she realized her love for illustration. Alleanna finds inspiration in the beauty of everyday things. She seeks to create images that are immersive, rich in color, and have a sense of warmth. She lives in New Jersey. Find out more about her at alleannaharris.com.
Ella Fitzgerald and Marilyn Monroe were mutual supporters according to this historical picture book.Ella and Marilyn were different on the outside, but both were "full of hopes and dreams" while their circumstances were humble. After they got their big breaks, Ella in jazz singing and Marilyn in acting, each struggled to reach her full potential. In the United States, Ella faced barriers due to racism and places that only hired "glamorous" stars. Marilyn got plenty of roles, but as a woman in an industry run by men, she lacked control over her career. When she got a script with a big singing role, she listened to her favorite singer, Ella, to practice for it. The movie was a hit, and Marilyn was finally able to get her voice heard as a professional. She went to thank Ella in person at one of Ella's shows, and the two talked into the night. When Marilyn learned of the barriers Ella faced, she used her star status to negotiate a performance for Ella at a popular nightclub. While Marilyn is shown attaining fame first, this warm story emphasizes Ella's role in her success, thus avoiding the trap of the white-savior narrative. Many white artists have benefited from imitating black ones; this is the rare narrative to acknowledge that. Harris' illustrations are stiff but engaging; saturated with color, they capture the iconic looks of the two stars. A good volume to include in a larger conversation about friendship, allyship, and social justice.(author's note, sources) (Picture book/biography. 5-10)
— Kirkus Reviews

African American singer Ella Fitzgerald and blonde movie star Marilyn Monroe shared their need to be heard and helped each other along the way. Kirkfield describes the obstacles these women faced: Fitzgerald battled racism, and Monroe was underestimated due to her gender. Monroe taught herself to become a better singer by listening to recordings of Fitzgerald's songs and achieved star status for her role in the 1953 film Gentlemen Prefer Blondes. In turn, she convinced the owner of a formerly whites-only Hollywood night club to hire Fitzgerald, paving the way for the jazz singer's more universal recognition. The relatively simple text is supported by an author's note and extensive sources, both primary (videos and interviews) and secondary (books and online resources). Kirkfield makes clear that both women brought deep personal feelings to their performances. Harris's digital illustrations are varied, from vignettes to full and double-page spreads. One striking spread echoed on the title page and cover shows the pair still engaged in conversation in an otherwise empty and darkened nightclub.

VERDICT An inspiring story about 20th-century icons that will be unfamiliar to most young readers. Recommended for schools and public libraries.
— School Library Journal

"Sometimes even stars need a little help to shine." Focusing on the friendship of Ella Fitzgerald and Marilyn Monroe, this picture book highlights the similarities between the two women and the ways in which they helped each other succeed. The author alternates between the two stars, first sharing their discovery stories and then their struggles to overcome barriers. When Marilyn was given her first major singing role in a movie, she learned how to sing by immersing herself in Ella's music. After the movie's success, she sought out Ella to thank her in person, and a lifelong friendship began. After learning about the racial discrimination Ella faced, Marilyn used her influence to secure her a singing engagement at Hollywood's top nightclub. The text moves smoothly, though the use of girls to describe the women may raise eyebrows. Softly focused illustrations blend cartoon style with realism. The overall effect is slightly uneven but generally captures each woman's likeness. Back matter includes an author's note and primary and secondary sources. A solid purchase for larger collections.
— Booklist