Making Music: The Banjo in a Southern Appalachian County (American Made Music) (Hardcover) 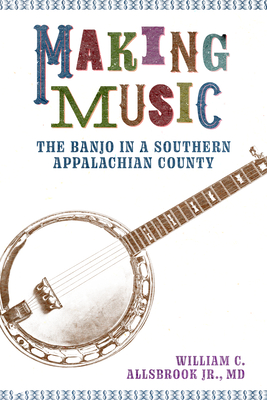 Making Music: The Banjo in a Southern Appalachian County (American Made Music) (Hardcover)


Coming Soon—Pre-Order Now
The banjo has been emblematic of the southern Appalachian Mountains since the late twentieth century. Making Music: The Banjo in a Southern Appalachian County takes a close look at the instrument and banjo players in Haywood County, North Carolina. Author William C. Allsbrook Jr., MD, presents the oral histories of thirty-two banjo players, all but two of whom were born in Haywood County. These talented musicians recount, in their own words, their earliest memories of music, and of the banjo, as well as the appeal of the banjo. They also discuss learning to play the instrument, including what it "feels like" playing the banjo, many describing occasional "flow states." In the book, Allsbrook explores an in-home musical folkway that developed along the colonial frontier. By the mid-1800s, frontier expansion had ceased in Haywood County due to geographic barriers, but the in-home musical tradition, including the banjo, survived in largely isolated areas. Vestiges of that tradition remain to this day, although the region has undergone significant changes over the lifetimes of the musicians interviewed. As a result, the survival of the in-home tradition is not guaranteed. Readers are invited into the private lives of the banjo players and asked to consider the future of the banjo in the face of contemporary trends. The future will be shaped by how this remarkable mountain culture continues to adapt to these challenges. Still, this thriving community of banjo players represents the vibrant legacy of the banjo in Haywood County and the persistence of tradition in the twenty-first century.
William C. Allsbrook Jr., MD, is professor emeritus of pathology and surgery (urology) at the Medical College of Georgia, Augusta University. A few years after retiring to Haywood County, he began taking banjo lessons and, upon recognizing the remarkably large number of banjo players in the county, decided to explore this phenomenon