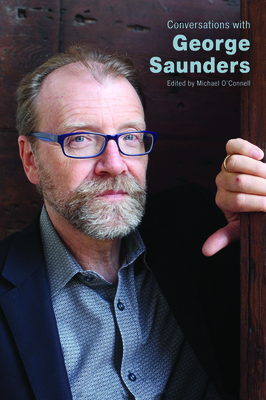 
In Stock—Click for Locations
Besides being one of America's most celebrated living authors, George Saunders (b. 1958) is also an excellent interview subject. In the fourteen interviews included in Conversations with George Saunders, covering nearly twenty years of his career, the Booker Prize-winning author of Lincoln in the Bardo and Tenth of December provides detailed insight into his own writing process and craft, alongside nuanced interpretations of his own work. He also delves into aspects of his biography, including anecdotes from his childhood and his experiences as both a student and teacher in MFA programs, as well as reflections on how parenthood affected his writing, the role of religious belief and practice in his work, and how he has dealt with his growing popularity and fame. Throughout this collection, we see him in conversation with former students, fellow writers, mainstream critics, and literary scholars. In each instance, Saunders is eager to engage in meaningful dialogue about what he calls the "big questions of our age." In a number of interviews, he reflects on the moral and ethical responsibility of fiction, as well as how his work engages with issues of social and political commentary. But at the same time, these interviews, like all of Saunders's best work, are funny, warm, surprising, and wise. Saunders says he has "always enjoyed doing interviews" in part because he views "intense, respectful conversation as], really, an artform--an exploration of sorts." Readers of this volume will have the pleasure of joining him in this process of exploration.
Michael O'Connell is associate professor of humanities at Siena Heights University in Adrian, Michigan, where his scholarly interests focus primarily on the intersections of religion, particularly Catholicism, and contemporary literature. His critical essays appear in Christianity and Literature, Renascence, American Catholic Studies, Religion and the Arts, and the Journal of David Foster Wallace Studies.