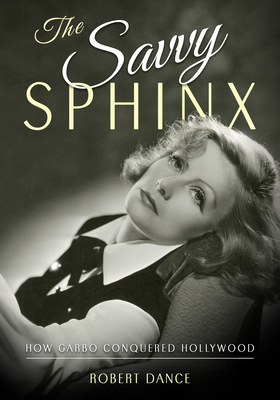 
Special Order—Subject to Availability
From the late 1920s through the thirties, Greta Garbo (1905-1990) was the biggest star in Hollywood. She stopped making films in 1941, at only thirty-six, and thereafter sought a discreet private life. Still, her fame only increased as the public and press clamored for news of the former actress. At the time of her death, forty-nine years later, photographers continued to stalk her, and her death was reported on the front pages of newspapers worldwide. In The Savvy Sphinx: How Garbo Conquered Hollywood, Robert Dance traces the strategy a working-class Swedish teenager employed to enter motion pictures, find her way to America, and ultimately become Hollywood's most glorious product. Brilliant tactics allowed her to reach Hollywood's upper-most echelon and made her one of the last century's most famous people. Garbo was discovered by director Mauritz Stiller, who saw promise in her nascent talent and insisted that she accompany him when he was lured to America by an MGM contract. By twenty she was a movie star and the epitome of glamour. Soon Garbo was among the highest-paid performers, and in many years she occupied the number one position. Unique among studio players, she quickly insisted on and was granted final authority over her scripts, costars, and directors. But Garbo never played the Hollywood game, and by the late twenties her unwillingness to grant interviews, attend premieres, or meet visiting dignitaries won her the sobriquet the Swedish Sphinx. The Savvy Sphinx, which includes over a hundred beautiful images, charts her rise and her long self-imposed exile as the queen who abdicated her Hollywood throne. Garbo was the paramount star produced by the Hollywood studio system, and by the time of her death her legendary status was assured.
Robert Dance is author of Hollywood Icons and Glamour of the Gods and coauthor of Garbo: Portraits from Her Private Collection and Ruth Harriet Louise and Hollywood Glamour Photography.