Lucky Dogs: From Bourbon Street to Beijing and Beyond (Hardcover) 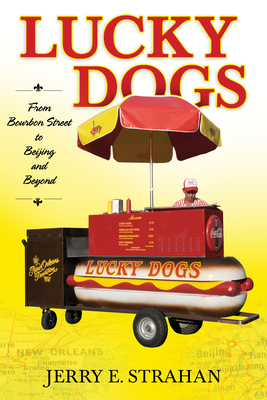 Lucky Dogs: From Bourbon Street to Beijing and Beyond (Hardcover)

When walking the French Quarter and watching a Lucky Dog salesman set up that colorful cart and call out to entice customers, don't you wonder how such a business works? As a knowing review in Rolling Stone stated, People have always loved the cart and harbored a mysterious need to ride it. Revelers have been known to climb on top of the rolling wienies, screaming 'Yippee kaya ' as vendors stoically push them back to the barn at 4 a.m. Since 1947 the red and yellow carts have trumpeted good fortune and sustenance.

Jerry E. Strahan recounts the wild adventures of the Bourbon Street wienie salesmen but also takes readers well beyond New Orleans. In fact, he takes them halfway around the world, where this unique pushcart business maneuvered its way through the bureaucratic red tape of a communist country to become a licensed corporation in the People's Republic of China.

In China, two points quickly became apparent to Strahan. First, 99 percent of the Chinese population had no idea what a Lucky Dog cart represented. One elderly passerby declared it to be a missile. Second, the success or failure of any joint venture in the Asian nation is directly proportional to the political clout of that company's local partner.

Lucky Dogs also recounts how the business and its vendors survived Hurricane Katrina. Miraculously, it reopened only six months after the storm in a city where more than 80 percent of the landmass had been flooded and where less than 40 percent of the population had returned. To reestablish itself in what many described as Third World conditions, the company had to transform its operation.

This work mixes business history, autobiography, survival story, and an insider's look at the bizarre lives of some of Bourbon Street's most quirky characters--the dauntless Lucky Dog vendors. Both humorous and tragic, though it may read like fiction, it is, for better or worse, all fact.