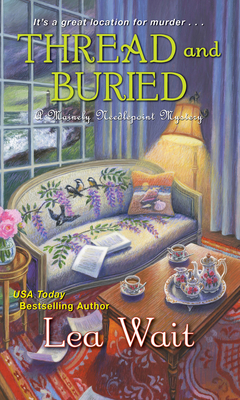 This is book number 9 in the A Mainely Needlepoint Mystery series.

Haven Harbor is an authentic coastal Maine town—which makes it the perfect location for a new film production. But now it’s become the scene of a crime . . .

Needlepointers Angie and Sarah are helping with set design for the movie being shot in their little New England hometown—but as the lighthouse and the wharves bustle with activity, a real-life drama is about to unfold. The director, Marv Mason, has been harassing the pretty young female lead, and the two exchanged heated words at a lobster bake. Now someone’s lowered the boom on him . . .

After a wayward piece of sound equipment sends him to his death, theories fly about who went off-script. Meanwhile, a local woman’s tragic story about a true love lost at sea, which originally inspired the film, may lead to murderous revelations from long ago. Angie’s got to unravel these mysteries, and may need to give more than one killer the hook . . .
Lea Wait lives on the coast of Maine. A fourth-generation antique dealer, and author of the Agatha-nominated Shadows Antique Print mystery series, she loves all things antiques and Maine, and she’s learning to do needlepoint. She also writes historical novels for young people set in (where else?) nineteenth-century Maine. Lea adopted her four daughters when she was single; she’s now the grandmother of eight. Find her at Facebook, Goodreads, and at www.leawait.com