The Power of Scenery: Frederick Law Olmsted and the Origin of National Parks (Hardcover) 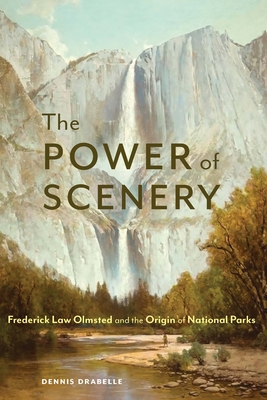 The Power of Scenery: Frederick Law Olmsted and the Origin of National Parks (Hardcover)

Wallace Stegner called national parks “the best idea we ever had.” As Americans celebrate the 150th anniversary of Yellowstone, the world’s first national park, a question naturally arises: where did the idea for a national park originate? The answer starts with a look at pre-Yellowstone America. With nothing to put up against Europe’s cultural pearls—its cathedrals, castles, and museums—Americans came to realize that their plentitude of natural wonders might compensate for the dearth of manmade attractions. That insight guided the great landscape architect Frederick Law Olmsted as he organized his thoughts on how to manage the wilderness park centered on Yosemite Valley, a state-owned predecessor to the national park model of Yellowstone. Haunting those thoughts were the cluttered and carnival-like banks of Niagara Falls, which served as an oft-cited example of what should not happen to a spectacular natural phenomenon.

Olmsted saw city parks as vital to the pursuit of happiness and wanted them to be established for all to enjoy. When he wrote down his philosophy for managing Yosemite, a new and different kind of park, one that preserves a great natural site in the wilds, he had no idea that he was creating a visionary blueprint for national parks to come. Dennis Drabelle provides a history of the national park concept, adding to our understanding of American environmental thought and linking Olmsted with three of the country’s national treasures. Published in time to celebrate the 150th anniversary of Yellowstone National Park on March 1, 2022, and the 200th birthday of Frederick Law Olmsted on April 26, 2022, The Power of Scenery tells the fascinating story of how the national park movement arose, evolved, and has spread around the world.
Dennis Drabelle is a writer and former attorney. During the 1970s he was an attorney-adviser at the U.S. Department of the Interior and counsel to the assistant secretary of the interior for fish and wildlife and parks. Drabelle was a contributing editor of the Washington Post Book World for more than thirty years. His books include Mile High Fever: Silver Mines, Boom Towns, and High Living on the Comstock Lode and The Great American Railroad War: How Ambrose Bierce and Frank Norris Took on the Notorious Central Pacific Railroad. His articles on the environment and national parks have appeared in Outside, Smithsonian, Sierra, Wilderness, Backpacker, and many other magazines.
"Dennis Drabelle's The Power of Scenery returns us to the steadier and more aesthetically pleasing ground of America's natural wonders. . . . Mr. Drabelle brings storytelling flair to even the most administrative portions of his narrative. This is a micro-history that feels big."—Sam Sacks, Wall Street Journal

"Come to The Power of Scenery for Olmsted; stay for the cast of characters who lead us—and the park idea—first backward to Charles Dickens and Frances Trollope, whose Eurocentric travelogues expose America's coarseness and provoke a nationalist desire to tout crown jewels of our own. On to Henry David Thoreau and artist George Catlin, who dreamed of national parks in the abstract. Then forward to Samuel Bowles, now-forgotten editor of Massachusetts's Springfield Republican, whom Drabelle credits with salvaging, then ballyhooing Olmsted's lost recommendations."—John Taliaferro, Washington Post

"While today we recognize that national parks have many more values than scenery, the "power of scenery" in the history of national parks is an important and entertaining story."—John Miles, National Parks Traveler

"Drabelle's careful attention to the wider political and cultural currents of the time makes for an astute history that colorfully traces the development of the laws, agencies, and departments that made the National Park Service what it is. It's a great look at the early underpinnings of the American conservation movement."—Publishers Weekly

"Drabelle offers a fascinating contribution to the history of US national parks and the biography of Frederick Law Olmsted."—E. J. Delaney, Choice

“Tracing the national park concept back to Thoreau, the artist George Catlin, and even Edmund Burke’s notion of the sublime, Drabelle gives us a vivid portrait of perhaps the most influential proponent of landscape preservation: the ubiquitous Frederick Law Olmsted. This absorbing book is a feast of ideas, anecdotes, and insights and a welcome reminder that the national parks were already a great idea when Theodore Roosevelt was still in short pants.”—Gary Krist, New York Times best-selling author of The Mirage Factory: Illusion, Imagination, and the Invention of Los Angeles

“Engaging and entertaining. Drabelle’s stitching-together of the loose threads of American thought that shaped not only Frederick Law Olmsted’s vision of nature and the salve it could provide to the public but also the origin of the national parks is a compelling and inspiring read. The Power of Scenery adds as much to our current conversations about the future of America’s parks as it illuminates their creation.”—Michael W. Childers, author of Colorado Powder Keg: Ski Resorts and the Environmental Movement