The Securitization of Memorial Space: Rhetoric and Public Memory (Hardcover) 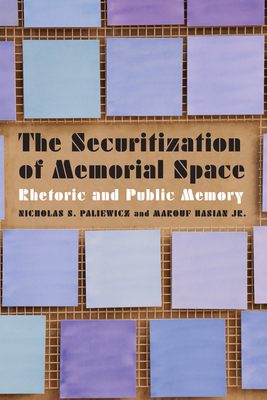 The Securitization of Memorial Space: Rhetoric and Public Memory (Hardcover)


Not On Our Shelves—Ships in 1-5 Days
The Securitization of Memorial Space argues that the National September 11 Memorial and Memorial Museum is a securitized site of memory—what Foucault called a dispositif—that polices visitors and publics to remember trauma, darkness, and victimage in ways that perpetuate the “necessity” of the Global War on Terrorism.

Contributing to studies in public memory, rhetoric and argumentation, and critical security studies, Nicholas S. Paliewicz and Marouf Hasian Jr. show how various human and nonhuman actors participated in complicated argumentative formations that have mobilized political, performative, and militaristic practices of anti-terroristic violence in other parts of the world. While there were times that certain argumentative stakeholders—such as local New Yorkers—questioned the necessity of securitizing this site of memory, agentic factions including the families of those who died on 9/11, public supporters, security agents, and politicians created an ideologically oriented security assemblage that remembers 9/11 through counter-terroristic performances at Ground Zero.

In chronological order from the 2001 “dustbowl” to the present popularization of 9/11 memories, the authors present seven chapters of rich rhetorical analysis that show how the National September 11 Memorial and Memorial Museum perpetuates grief, uncertainty, and angst that affects public memory in multidirectional ways.

“In The Securitization of Memorial Space Paliewicz and Hasian make a significant contribution to the field’s understanding of the rhetoric of memorials and museums. Their integration of rhetorical and critical theory brings enormous insight into the ways surveillance and control are practiced around, within, and through the memorial’s material rhetoric. This insight alone makes this book essential reading for those interested in public memory, space/place, and/or surveillance.”—George F. (Guy) McHendry Jr., assistant professor in the Department of Communication Studies at Creighton University


“An essential read for anyone interested in place and memory work in a post-9/11 culture. Paliewicz and Hasian offer an exhaustive review of literature surrounding the memory work at Ground Zero, and their critical analysis of the assemblages of public memory produced through the National September 11 Memorial and Memorial Museum offers significant insights into both the personal and global consequences of securitizing sites of trauma in the contemporary moment.”—Elinor Light, special assistant professor in the Department of Communication at Colorado State University