A Long Voyage to the Moon: The Life of Naval Aviator and Apollo 17 Astronaut Ron Evans (Outward Odyssey: A People's History of Spaceflight ) (Hardcover) 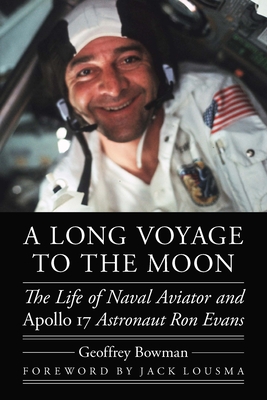 A Long Voyage to the Moon: The Life of Naval Aviator and Apollo 17 Astronaut Ron Evans (Outward Odyssey: A People's History of Spaceflight ) (Hardcover)


Not On Our Shelves—Ships in 1-5 Days
As command module pilot of Apollo 17, the last crewed flight to the moon, Ron Evans combined precision flying and painstaking geological observation with moments of delight and enthusiasm. On his way to the launchpad, he literally jumped for joy in his spacesuit. Emerging from the command module to conduct his crucial spacewalk, he exclaimed, “Hot diggity dog!” and waved a greeting to his family. As a patriotic American in charge of command module America, Evans was nicknamed “Captain America” by his fellow crew members.

Born in 1933 in St. Francis, Kansas, Evans distinguished himself academically and athletically in school, earned degrees in electrical engineering and aeronautical engineering, and became a naval aviator and a combat flight instructor. He was one of the few astronauts who served in combat during the Vietnam War, flying more than a hundred missions off the deck of the USS Ticonderoga, the same aircraft carrier that would recover him and his fellow astronauts after the splashdown of Apollo 17.

Evans’s astronaut career spans the Apollo missions and beyond. He served on the support crews for 1, 7, and 11 and on the Apollo 14 backup crew before being selected for Apollo 17 and flying on the final moon mission in 1972. He next trained with Soviet cosmonauts as backup command module pilot for the 1975 Apollo-Soyuz mission and carried out early work on the space shuttle program. Evans then left NASA to pursue a business career. He died suddenly in 1990 at the age of fifty-six.

Geoffrey Bowman is a retired litigation lawyer living with his wife in Belfast, Northern Ireland. A sometime glider pilot, he is a fellow of the British Interplanetary Society and has contributed to the society’s Spaceflight magazine. He is a regular contributor on spaceflight to the quarterly magazine of the Irish Astronomical Association, of which he is a member. Jack Lousma is a retired U.S. Marine Corps colonel, former naval aviator, NASA astronaut, and politician. He was a member of the second crew on the Skylab space station in 1973 and commanded the third space shuttle flight in 1982.
"At long last, those unfamiliar with Evans' life and career get to know the last person to perform a deep space EVA."—Emily Carney, National Space Society

"This well-written, fascinating book provides a biography of Evans with a special focus on his role during Apollo 17."—J. Z. Kiss, Choice

“From a small town in Kansas to dodging enemy rockets in a jet fighter over North Vietnam to orbiting the moon on Apollo’s final lunar voyage, here is the extraordinary journey of Ron Evans. In this thoroughly detailed biography, Geoffrey Bowman captures a man of unflappable calm and easygoing warmth who met the final frontier with unabashed exuberance. In these pages, you’ll learn why Evans left countless people, myself included, feeling honored and glad to have known him.”—Andrew Chaikin, author of A Man on the Moon: The Voyages of the Apollo Astronauts


“Ron Evans is one of the unsung heroes of the Apollo program. . . . I am delighted that this book now tells the story of Ron’s remarkable life.”—Farouk El-Baz, geologist and trainer of Apollo astronauts in observation and photography

“Ron Evans and I were selected as NASA astronauts in 1966. I enjoyed my time with Ron during our ‘rookie’ years through a variety of training before I was selected for Apollo 13 and Ron for Apollo 17. This very interesting and informative account of Ron’s life and career emphasizes how we shared with many others the immense privilege of having been a part of the Apollo program.”—Fred Haise, lunar module pilot on Apollo 13