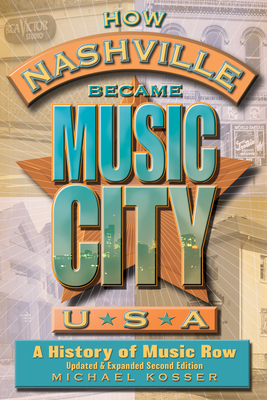 
Not On Our Shelves—Ships in 1-5 Days
How Nashville Became Music City, U.S.A. was first published in 2006 and quickly became the go-to reference for those seeking to understand the Nashville music industry, or write about it. Now, Michael Kosser, prolific songwriter and author, returns with an updated and expanded edition, bringing the history of Music Row up to the present, since so much has changed over the last fifteen years. This new edition of How Nashville Became Music City, U.S.A. details the history of the Nashville song and recording industry from the founding of its first serious commercial music publishing company in 1942 to the present. Kosser tells the history of Music Row primarily through the voices of those who made and continue to make that history, including record executives, producers, singers, publishers, songwriters, studio musicians, studio engineers, record promoters, and others responsible for the music and the business, including the ambitious music executives who struggle to find an audience who will buy country records instead of just listening to them on the radio. The result is a book with insight far beyond the usual media stories, with plenty of emotion, humor, and historical accuracy. Kosser traces the growth and cultural changes of Nashville and the adventurous souls who fly to it to be a part of the music. He follows the changes from its hillbilly roots through its "Nashville Sound" quasi-pop days, from the outlaws, the new traditionalists, and the mega-sellers to the recent bro country and the rise of mini-trends. This edition also bears witness to the huge influence of Music Row on pop, folk, rock, and other American music genres.
Michael Kosser came to Nashville to write songs in 1971 and enjoyed a songwriting career that included recordings by country stars like George Jones, Charlie Rich, Conway Twitty, Tammy Wynette, Ray Price, Kitty Wells, Barbara Mandrell, Marty Robbins, The Kendalls, Blake Shelton, and Josh Gracin. He has written twenty published books and was a senior editor at American Songwriter Magazine, where he wrote a column, "Street Smarts," for more than twenty years. Kosser has also written extensively for Variety, the Nashville news media, and various other music publications. He and his wife, Gina, live in Nashville, Tennessee.