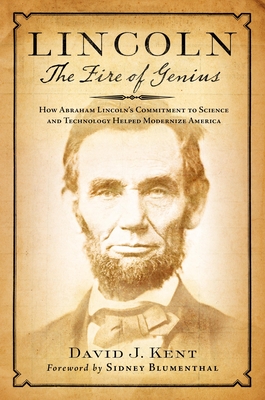 
In Stock—Click for Locations
Abraham Lincoln had a lifelong fascination with science and technology, a fascination that would help institutionalize science, win the Civil War, and propel the nation into the modern age. Readers will learn through Lincoln: The Fire of Genius how science and technology gradually infiltrated Lincoln's remarkable life and influenced his growing desire to improve the condition of all men. The book traces this progression from a simple farm boy to a president who changed the world. Counter to conventional wisdom, subsistence farming provides a considerable education in agronomic science, forest ecology, hydrology, and even a little civil engineering. Continuing through a lifetime of self-study, curiosity, and hard work, Lincoln became the only President with a patent, advocated for technological advancement as a legislator in Illinois and in Washington, and became the "go-to" western lawyer on technology, and patent cases during his legal career. During the Civil War, Lincoln drew upon his commitment to science and personally encouraged inventors while taking dramatic steps to institutionalize science via the Smithsonian Institution, create the National Academy of Sciences, and initiate the Department of Agriculture. Lincoln's insistence on high-tech weaponry, balloon surveillance, strategic use of telegraphy, and railroad deployment positioned the North to achieve Union victory.
David J. Kent is an award-winning scientist, an accomplished Abraham Lincoln historian, and a successful multi-book author. He has over 35 years of experience in scientific research, consulting, and writing, plus a lifetime of Lincoln studies. David is currently President of the Lincoln Group of DC, Treasurer and member of the Executive Committee and Board of Directors of the Abraham Lincoln Institute, and a member of the Lincoln Forum Board of Advisors. He has previously served as president of three different scientific organizations. Lincoln: The Fire of Genius is his sixth book. Previous books include Lincoln: The Man Who Saved America, Tesla: The Wizard of Electricity, and Edison: The Inventor of the Modern World. His writing has also been published in Civil War Times, The Lincolnian, Writer's Digest, Lincoln Herald, The Lincoln Forum Bulletin, Smithsonian's Civil War Studies newsletter, Tesla Magazine, and other outlets. His website is http: //www.davidjkent-writer.com/