A Flick of Sunshine: The Remarkable Shipwrecked, Marooned, Maritime Adventures, and Tragic Fate of an American Original (Hardcover) 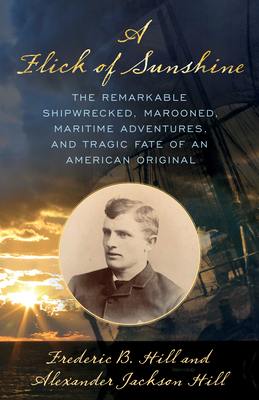 A Flick of Sunshine: The Remarkable Shipwrecked, Marooned, Maritime Adventures, and Tragic Fate of an American Original (Hardcover)


Backordered
The true and remarkable life of Richard Willis (Will) Jackson, an intrepid seaman from one of the leading shipbuilding families in 19th century Maine, whose exploits and adventures in the oceans of the world would rival characters straight out of the lives and imaginations of Joseph Conrad and Jack London. Will Jackson survived a harrowing shipwreck in the Marshall Islands, being washed overboard rounding Cape Horn and running down Alaskan glaciers over a tragically shortened life that ended in a most bizarre and pedestrian incident on the eve of realizing his life's ambition: appointment as master of a ship. After nine months of sometimes perilous life among natives in the South Sea islands in 1884, captured in chapters of a book he helped write, Jackson served on a series of large ships and coastal schooners - all based in the post-Gold Rush boomtown of San Francisco - that took him up and down the west coast from Alaska to Mexico and to the four corners of the earth. His faithful letters to his family in Maine and a diary provide a colorful background for a compelling portrait of an extraordinary young man of character and independent spirit, intellect and curiosity, no small ambition and that most admirable of traits, an abiding sense of humor.
Frederic B. Hill was a reporter, correspondent and editorial writer for The Baltimore Sun, covering Europe and southern Africa. He served as foreign affairs director for Senator Charles McC. Mathias, Jr (R; MD) in 1985 and 1986, then conducted policy planning exercises (wargames) and conferences on national security issues for the Department of State from 1986 to 2006. A native of Maine and graduate of Bowdoin College, he served as president of Maine's First Ship, a non-profit organization building a reconstruction of Virginia, one of the first vessels built in America at Popham Beach, Maine in 1608. He is author of Ships, Swindlers and Scalded Hogs; the Rise and Fall of the Crooker Shipyard in Bath, Maine (Down East Books, 2016), co-editor of The Life of Kings; The Baltimore Sun and the Golden Age of the American Newspaper (Rowman & Littlefield, 2016) and author of Dereliction of Duty; The Failed Presidency of Donald John Trump (Amazon Books, 2020). ******* Alex Hill has been in the financial services and financial technology industry in San Francisco and Silicon Valley for many years and now resides in San Diego, California. Born in London and a graduate of Denison University, Alex has travelled extensively and has published many travel articles and stories. ******** Editor's Note: Richard Willis (Will) Jackson was an older brother of Charles T. Jackson, Frederic Hill's grandfather, thus his great uncle, and the great, great uncle of Alexander Hill, son of Frederic Hill.