The Man Who Stalked Einstein: How Nazi Scientist Philipp Lenard Changed the Course of History (Hardcover) 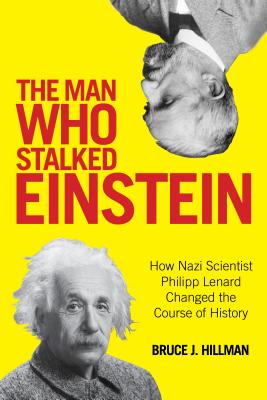 The Man Who Stalked Einstein: How Nazi Scientist Philipp Lenard Changed the Course of History (Hardcover)


Special Order—Subject to Availability
By the end of World War I, Albert Einstein had become the face of the new science of theoretical physics and had made some powerful enemies. One of those enemies, Nobel Prize winner Philipp Lenard, spent a career trying to discredit him. Their story of conflict, pitting Germany's most widely celebrated Jew against the Nazi scientist who was to become Hitler's chief advisor on physics, had an impact far exceeding what the scientific community felt at the time. Indeed, their mutual antagonism affected the direction of science long after 1933, when Einstein took flight to America and changed the history of two nations. The Man Who Stalked Einstein details the tense relationship between Einstein and Lenard, their ideas and actions, during the eventful period between World War I and World War II.
Bruce J. Hillman, MD has distinguished himself as a health services researcher, clinical trialist, and author of both medical articles and short stories published in elite magazines and journals. He is Professor and former Chair of Radiology at the University of Virginia School of Medicine. He has published over 300 medical articles, book chapters, and editorials, including his 2010 book for the lay public, The Sorcerer's Apprentice - How Medical Imaging is Changing Health Care (Oxford University Press). Dr. Hillman has served as Editor-in-Chief of three medical journals, including his current position with the Journal of the American College of Radiology. He was Deputy Editor of the online literary and humanities journal, Hospital Drive, and has published eight short stories in such journals as The Connecticut Review, Compass Rose, and Aethlon, the Journal of Sports Literature.