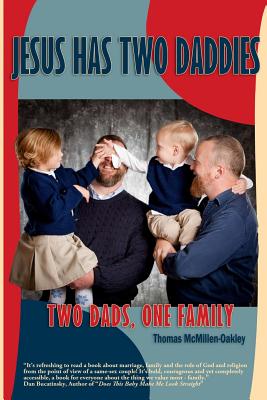 
Not On Our Shelves—Ships in 1-5 Days
(This book cannot be returned.)
Jesus Has Two Daddies chronicles our quest to start a family in the birthplace of the Republican Party. Book Synopsis: As teachers, when Tom Oakley and Tod McMillen first begin to talk about starting a family, they each tried to find as much information as possible, as they wanted to learn about the best way to go about this life changing decision. There was very little information geared towards gay men, so after a few months of searching, a little reading, and legally changing their names to McMillen-Oakley, they felt comfortable diving into the adoption process head first. They thought they knew everything. They were wrong. It is said that love makes a family. But in this case it was a teenage girl with two moms, a couple of lawyers, and just three weeks to get ready that made this particular family. This is the story of how their family was born, first through the private adoption of their daughter, and then expanding it with the adoption of their son from foster care three years later. Their adoption experience challenges the notion of what makes a family and sheds new light on the world of open adoption and LGBT parenting. While Tom and Tod thought they were just adopting a baby girl, they got much more. And the kids? They got two daddies.
About the Author: Tom McMillen-Oakley is an artist, a professor, a dad and husband living in Jackson, Michigan. He grew up in Toledo, Ohio and attended the University of Toledo and the School of Design at the Toledo Museum of Art for a degree in Art Education. Upon graduation, he began teaching high school art and in 2000 he was named the Michigan Art Education Association's Higher Education Art Teacher of the year. Tom and his husband Tod were married in California in 2008; they have two children with two legs and two children with four legs. The four-legged children are often times better behaved then the two-legged children.