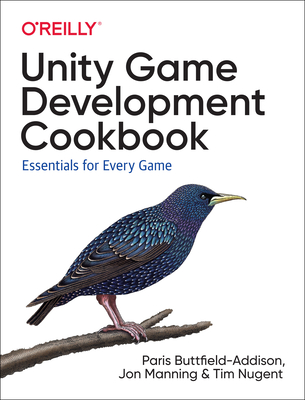 Discover how to use the Unity game engine to its full potential for both 3D and 2D game development--from the basics of scripting to useful tricks in gameplay, behavior, and animation. With this problem-solving cookbook, you'll get started in two ways:

First, you'll learn about the Unity game engine through brief recipes that teach specific features of the software and scripting systems.

Using our cookbook format, we pinpoint the problem, set out the solution, and discuss how to solve your problem in the best and most straightforward way possible. This book is ideal for beginning to intermediate Unity developers.

Paris Buttfield-Addison is co-founder of Secret Lab, an indie game and app development studio in Hobart, Australia. He spends his time designing video and board games, and mobile apps, and is also co-author of more than a dozen technical books, mostly for O'Reilly -- recently Learning Swift and a book on the Kerbal Space Program video game.Jon Manning is co-founder of Secret Lab, and is a software engineering expert in Swift, C#, and Objective-C. Jon builds games and apps at Secret Lab for clients from around the world, including the Australian Broadcasting Corporation, Qantas, and Meebo (acquired by Google). Jon has co-authored more than a dozen technical books, and has a PhD in Computing.Tim Nugent pretends to be a mobile app developer, game designer, PhD student, and now he even pretends to be an author. When he isn't busy avoiding being found out as a fraud, he spends most of his time designing and creating little apps and games he won't let anyone see. Tim spent a disproportionately long time writing this tiny little bio, most of which was spent trying to stick a witty sci-fi reference in, before he simply gave up. Tim can be found as @The_McJones on Twitter.