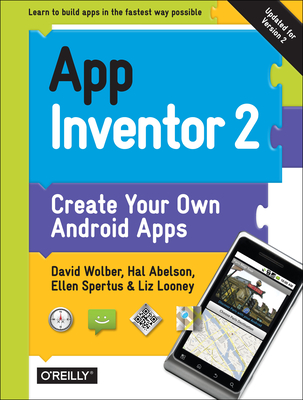 Yes, you can create your own apps for Android devices--and it's easy to do. This extraordinary book introduces you to App Inventor 2, a powerful visual tool that lets anyone build apps. Learn App Inventor basics hands-on with step-by-step instructions for building more than a dozen fun projects, including a text answering machine app, a quiz app, and an app for finding your parked car

The second half of the book features an Inventor's Manual to help you understand the fundamentals of app building and computer science. App Inventor 2 makes an excellent textbook for beginners and experienced developers alike.

David Wolber is a leader in App Inventor education and teaching beginners how to program their phones and tablets. His focus is empowering artists, designers, kids, women, men, humanity majors, business students--makers of all types--to add coding to their creative arsenals. His teaching materials, video screencasts, and course-in-a-box are available at appinventor.org, and his students have been chronicled in articles of the New York Times, San Francisco Chronicle, and Wired Magazine.David is a professor at the University of San Francisco. He taught one of the first App Inventor courses in 2009 as part of a Google pilot and has been teaching and working with the App Inventor teaching community ever since. His teaching materials on the Google and MIT sites, and on appinventor.org, have provided the first introduction to coding for thousands of new app builders, and his course-in-a-box materials have served as a template for many App Inventor courses at the K-12 and university levels. David recently took a sabbatical at MIT to work with co-author Hal Abelson and contribute to the development of App Inventor 2. He also is contributing to the Mobile Computer Science Principles (mobile-csp.org) course for the new Advanced Placement (AP) course is US high schools.Harold (Hal) Abelson, a professor of Electrical Engineering and Computer Science at MIT, has a longstanding interest in using computation as a conceptual framework in teaching. He has played a key role in fostering MIT institutional educational technology initiativeI, and is a founding director of Creative Commons and Public Knowledge. Hal's book, Turtle Geometry, written with Andrea diSessa in 1981, presented a computational approach to geometry that has been cited as "the first step in a revolutionary change in the entire teaching/learning process."Ellen Spertus is an Associate Professor of Computer Science at Mills College, where she has taught with App Inventor, and a Senior Research Scientist at Google, where she was one of the App Inventor developers. She and her work have been written about in Wired, USA Today (which described her as "a geek with principles"), and in The New York Times (as one of three "women who might change the face of the computer industry"). In addition to her many technical publications, her writings have appeared in the book She's Such a Geek: Women Write about Science, Technology, and Other Nerdy Stuff and in the magazines Technology Review, Chronicle of Higher Education, Odyssey: Adventures in Science, and Glamour.Liz Looney is a senior software engineer at Google, where she helped develop App Inventor and is a member of the Robotics Task Force. She has over 20 years of experience in creating programming tools and holds a bachelor's degree in Computer Science from The University of New Hampshire.