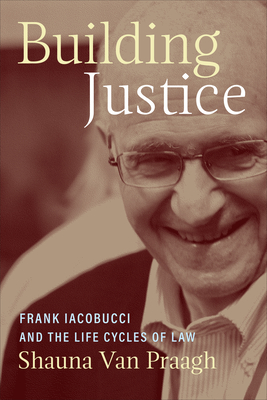 Building Justice draws on the inspiring life of former Canadian Supreme Court Justice Frank Iacobucci to offer insight into the meaning of engaged citizenship through law.

Ignoring early advice that he had the wrong kind of name to go to law school, Frank Iacobucci, the son of Italian immigrants, made a name for himself as an outstanding Canadian jurist. Serving as justice of the Supreme Court of Canada from 1991 to 2004, Iacobucci was also professor and dean of law at the University of Toronto and deputy minister of justice for Canada.

In Building Justice, Shauna Van Praagh weaves together the voices of individuals whose paths and projects have intersected with those of Frank Iacobucci. The book provides a compelling consideration of the study and practice of law as it follows the stages of Iacobucci's life and career: from his childhood in Vancouver, his practice as a young lawyer, his time at the University of Toronto and with the Federal Department of Justice, his work as a judge at the highest level of court, and his significant engagement with Canada's ongoing response to the legacy of residential schools.

Building Justice is a beautifully written biography in which the stories of one jurist serve to explore and illustrate engaged citizenship through law.