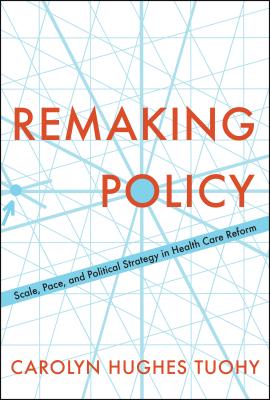 One of the most persistent puzzles in comparative public policy concerns the conditions under which discontinuous policy change occurs. In Remaking Policy, Carolyn Hughes Tuohy advances an ambitious new approach to understanding the relationship between political context and policy change.

Focusing on health care policy, Tuohy argues for a more nuanced conception of the dynamics of policy change, one that makes two key distinctions regarding the opportunities for change and the magnitude of such changes. Four possible strategies emerge: large-scale and fast-paced (big bang), large-scale and slow-paced (blueprint), small-scale and rapid (mosaic), and small-scale and gradual (incremental). As Tuohy demonstrates, these strategies are determined not by political and institutional conditions themselves, but by the ways in which political actors, individually and collectively, read those conditions to assess their prospects for success in the present and over time.

Drawing on interviews as well as primary and secondary accounts of ten health policy cases over seven decades (1945--2015) in the US, UK, the Netherlands, and Canada, Remaking Policy represents a major advance in understanding the scale and pace of change in health policy and beyond.