History's People: Personalities and the Past (CBC Massey Lectures) (Paperback) 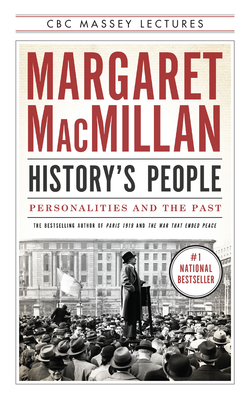 History's People: Personalities and the Past (CBC Massey Lectures) (Paperback)


Special Order—Subject to Availability
In History's People internationally acclaimed historian Margaret MacMillan gives her own personal selection of figures of the past, women and men, some famous and some little-known, who stand out for her. Some have changed the course of history and even directed the currents of their times. Others are memorable for being risk-takers, adventurers, or observers. She looks at the concept of leadership through Bismarck and the unification of Germany; William Lyon MacKenzie King and the preservation of the Canadian Federation; Franklin Delano Roosevelt and the bringing of a unified United States into the Second World War. She also notes how leaders can make huge and often destructive mistakes, as in the cases of Hitler, Stalin, and Thatcher. Richard Nixon and Samuel de Champlain are examples of daring risk-takers who stubbornly went their own ways, often in defiance of their own societies. Then there are the dreamers, explorers, and adventurers, individuals like Fanny Parkes and Elizabeth Simcoe who manage to defy or ignore the constraints of their own societies. Finally, there are the observers, such as Babur, the first Mughal emperor of India, and Victor Klemperer, a Holocaust survivor, who kept the notes and diaries that bring the past to life. History's People is about the important and complex relationship between biography and history, individuals and their times.

Margaret MacMillan is the author of the international bestsellers The War that Ended Peace, Nixon in China and Paris 1919: Six Months That Changed the World, which won the Governor General's Literary Award and the Samuel Johnson Prize. She is also the author of The Uses and Abuses of History. The past provost of Trinity College at the University of Toronto, she is now the warden of St. Antony's College and a professor of international history at Oxford University and a professor of history at the University of Toronto.