The Greedy Python: Book and CD (The World of Eric Carle) (Paperback) 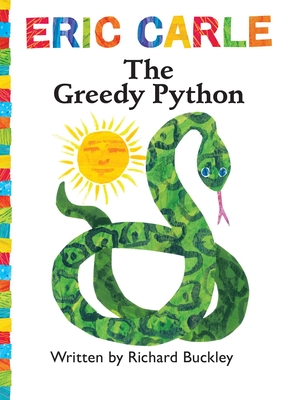 The Greedy Python: Book and CD (The World of Eric Carle) (Paperback)


Not On Our Shelves—Ships in 1-5 Days
A snake is too greedy for his own good in this book and CD package illustrated by children’s book legend Eric Carle and narrated by award-winning actor Stanley Tucci.

In this classic picture book from Richard Buckley and Eric Carle that includes a CD with audio narration by Stanley Tucci, a greedy python eats every creature he comes across in the jungle. From a tiny mouse to an enormous elephant, the eaten animals befriend one another in the belly of the snake, where they team up and kick the inside of the python until he spits them out.

This humorous tale about manners, respect, and friendship will delight readers—and listeners!
Richard Buckley is a much-traveled English writer of both prose and poetry. He has lived in New York, Paris, and London, but his present home is in Cheltenham, England, where he has lived for the past thirty years, bringing up two sons with his wife (and muse) Elfie. His books for children include The Dutiful Penguin, The Foolish Tortoise (with Eric Carle), The Greedy Python (with Eric Carle), and The Bird Who Couldn’t Fly (with Alex Williams).

Eric Carle (1929–2021) was acclaimed and beloved as the creator of brilliantly illustrated and innovatively designed picture books for very young children, including Papa, Please Get the Moon for Me; Have You Seen My Cat?; and TheTiny Seed. His best-known work, The Very Hungry Caterpillar, has been translated into seventy languages and sold over fifty-five million copies. Carle illustrated more than seventy books, many bestsellers, most of which he also wrote, and more than 170 million copies of his books have sold around the world. In 2003, Carle received the Children’s Literature Legacy Award for lifetime achievement in children's literature. In 2002, Eric and his wife, Barbara, cofounded The Eric Carle Museum of Picture Book Art (CarleMuseum.org) in Amherst, Massachusetts, a 40,000-square-foot space dedicated to the celebration of picture books and picture book illustrations from around the world, underscoring the cultural, historical, and artistic significance of picture books and their art form. Eric Carle passed away in May 2021 at the age of ninety-one. His work remains an important influence on artists and illustrators at work today. Find out more at Eric-Carle.com.

Italian American actor Stanley Tucci was born in New York in 1960. He has directed five films and appeared over seventy films, including The Devil Wears Prada, Easy A, The Terminal, and Road to Perdition, as well as more than a dozen plays, on and off Broadway. He starred in Julie & Julia, opposite Meryl Streep, and The Lovely Bones, for which he earned his first Academy Award nomination, for Best Supporting Actor. He is the winner of two Golden Globes and two Emmys. Tucci’s foodie TV show, Stanley Tucci: Searching for Italy, recently aired on CBS and is nominated for an Emmy.