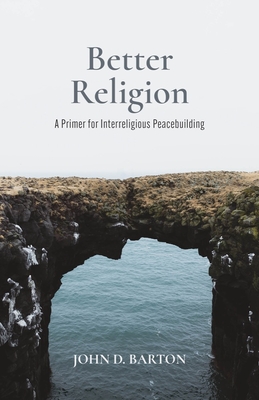 In the twenty-first century, humanity faces both unprecedented existential threats and remarkable possibilities for development. While no one knows how things will unfold by century's end, it is increasingly clear that religion will play a major role in shaping the outcomes, for better or worse. In Better Religion, philosopher and religion scholar John Barton explores how grassroots interreligious peacebuilding can help ensure the "better."

More specifically, the book argues that for religion's "better" to be realized, interreligious peacebuilding must honor and directly engage religious differences. This challenges a common assumption that religious differences inevitably lead to hostilities and must therefore be minimized or functionally neutralized for collaborative peacebuilding to be possible. Better Religion explains why such assumptions are misguided and charts a more realistic and hopeful way forward. Using a blend of data analysis, theoretical models, and real-life anecdotes, the book makes sense of global religious diversity and projects the possibilities of peacebuilding across even the most irreconcilable of differences.

Written for academic and professional audiences, this "conceptual primer" will equip readers to understand religion in the twenty-first century and pursue constructive collaborations for human flourishing, all for the sake of the world we currently share and the world we want our grandchildren to inherit.

John Barton is Professor of Teaching in the Religion and Philosophy Division at Pepperdine University where he also serves as director of the Pepperdine Center for Faith and Learning.